Trekking across Turkey surely is interesting!  What’s our next stop? 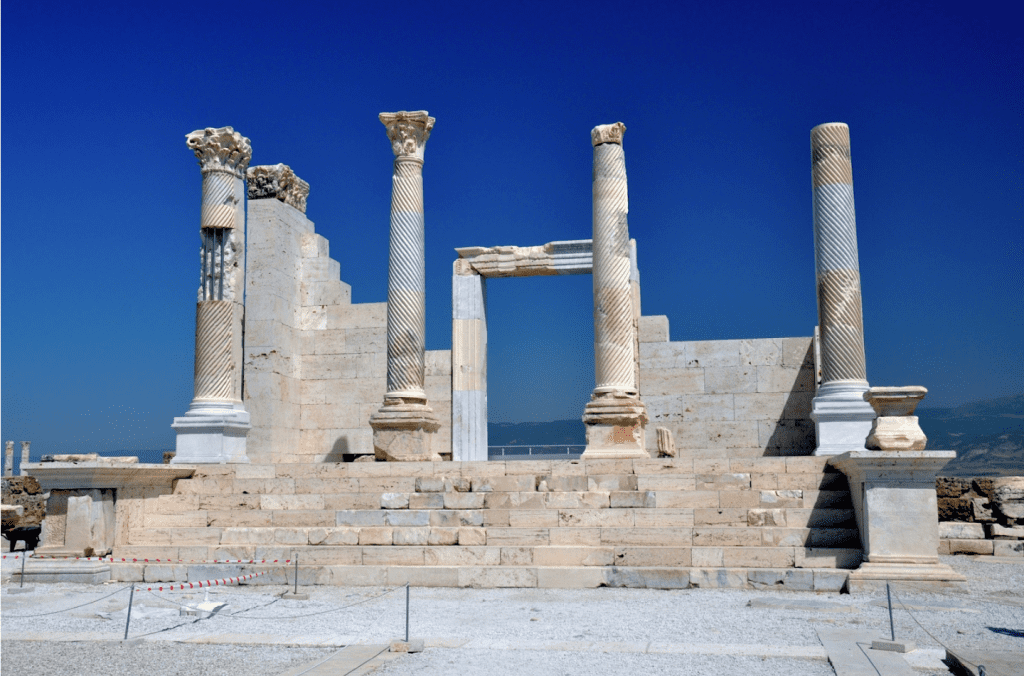 The city is one of five cities founded by Antiochus II around 260 BC.  It was named after his wife Laodice and built over an earlier settlement named Diospolis (“City of Zeus”).   It later became known as Rhodas.  Then, after the Treaty of Apamea in 188BC, the city was ruled by the Attalids of Pergamum.

Laodicea is located along the Anatolian Highway and was a thriving commercial and banking center.  Sheep producing soft, and much sought-after, raven-black wool were also bred here. The city was also home to a medical school.  Demosthenes Philalethes, a renowned ophthalmologist of the time, wrote an influential textbook on the eye.   An ancient healing formula for the eyes called Phrygian powder also has it’s origins in Laodicea.  In addition, zinc and alum were common in the area and form the active ingredients in a popular eye salve of the day.

The last of the 7 churches mentioned in The Book of The Revelation.  In 166 AD, Bishop Sagaris was martyred in Laodicea. Then, in 363 AD, the Council of Laodicea met here.  As a result,  they issued 59 canons dealing largely with the conduct of church members.   A 60th canon lists the books of the Old and New Testaments.  However, this canon strangely omits The Book of The Revelation.

Unfortunately, the city’s location means earthquakes were common.  In 60 AD, another earthquake devastated the city.   Rome offered financial assistance to rebuild the city and the residents of the city gladly accepted aid and rebuilt numerous times.  However after the earthquake in 60 AD, residents refused Roman financial assistance and, using their own resources, rebuilt the city themselves.  However, a devastating earthquake, during the reign of Focas (602-610 AD), became the city’s final demise.   Afterwards, Laodicea was abandoned.

Laodicea on the Lycus River is located at the crossroads of important trade routes. The city was once a prosperous city.  In the times of late antiquity, residents included a large Jewish community and a significant congregation of Christians. St. John mentioned Laodicea as one of the Seven Churches of Asia in the Book of The Revelation.

Laodicea sits on a hill between fertile valleys irrigated by the waters of Asopus (tr. Gümüşçay) and Kapros (tr. Başlıçay) streams. They are the tributaries of the Lycus River, now known as Çürüksu Çayı, which flows on the north-eastern side of the hill. This river gave Laodicea its cognomen or nickname – ad Lycum – meaning in the River Lycus. This distinguishes the city from other others with the name of Laodicea, also founded by Antiochus II.

Laodicea sits on an important trade route, from Sardis through Philadelphia. There are many important ancient cities nearby, as well.  Just 10 km to the north of Laodicea, is the famous Roman spa of Hierapolis.  Colossae, known from the Epistle to the Colossians written by St. Paul, is 14.5 km to the east.  The city of Tripolis on the Meander is on the road to Sardis, 26 km to the north-west of Laodicea.

The excavations in Laodicea and the immediate neighborhood show the oldest traces of human activity in the area to be around 3500 – 300 BCE.  This is the period of the Late Chalcolithic and the Early Bronze Age. Researchers have found tools made of flint and obsidian from this time.

Moreover, the excavations in the area of the northern necropolis of Laodicea show a settlement already in existence.  This is before the foundation of the city in the Hellenistic period. Coins and pottery fragments from the 4th century BCE indicate inhabitants from the native population of the territory of Asia Minor. 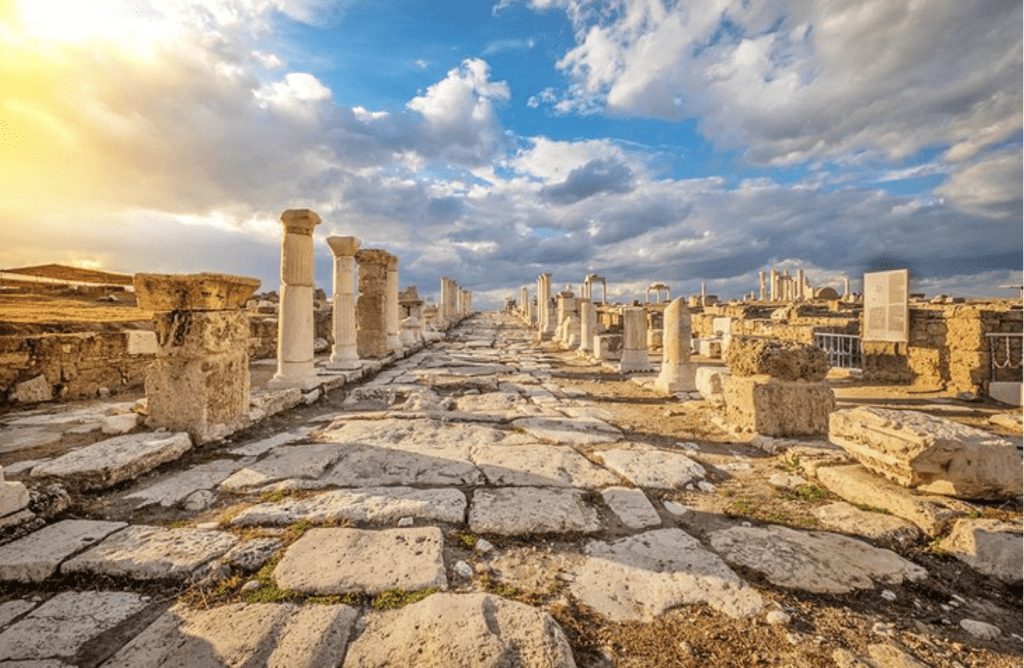 The main ruins lie in the northern section of the site, on or accessed off colonnaded Syria Street.  One enters Syria Street through the remnants of the eastern Byzantine gate.  This remains one of Laodikeia’s main roads from the 1st century. 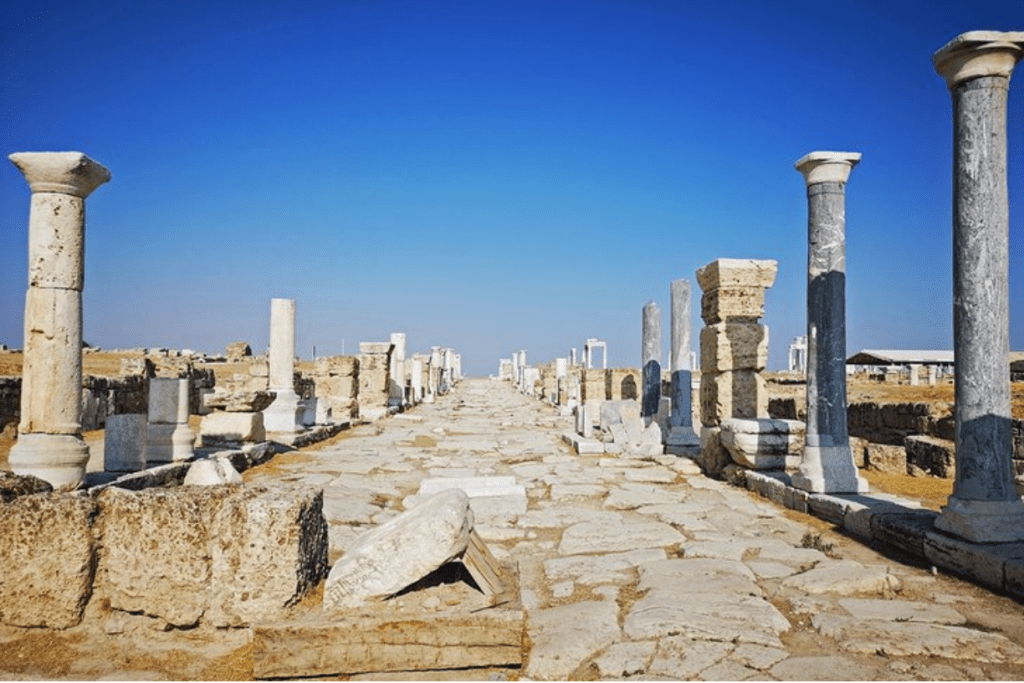 Once lined by important buildings, today Temple A, with its courtyard and re-erected columns, is one of the street’s major monuments. Archaeologists raised a glass roof over the temple’s sub-chamber, creating a viewing platform down into the vaulted chamber below.  Then, next door to Temple A, we find the remains of the Septimus Severus Nymphaeum.

Next, we come to the vast complex of the sacred agora (open space) with its large propylon, or temple entrance. The sacred agora was a major place of worship during the Roman era, with temples dedicated to Athena and Zeus.  On the opposite side of the road is the city’s large, rectangular central agora.  It was once lined with shops. The agora’s central column is now standing.

Heading north from the church, you arrive at the unexcavated north theater.  Note the beautiful panoramic views across the countryside to the white travertines of Pamukkale.  The theater was built in the 2nd century and originally had a cavea (enclosure) of 49 rows, split into two tiers.  As a result, the theatre seats 12,000 spectators.  From here, it’s only a short walk to the west theater, which has been undergoing a thorough restoration in recent years.  To get to the west theatre, one passes the northern entrance of the sacred agora’s colonnaded street.  The west theater is Laodikeia’s earliest theater building, dating from the Hellenistic era.  It seats up to 15,000 spectators. 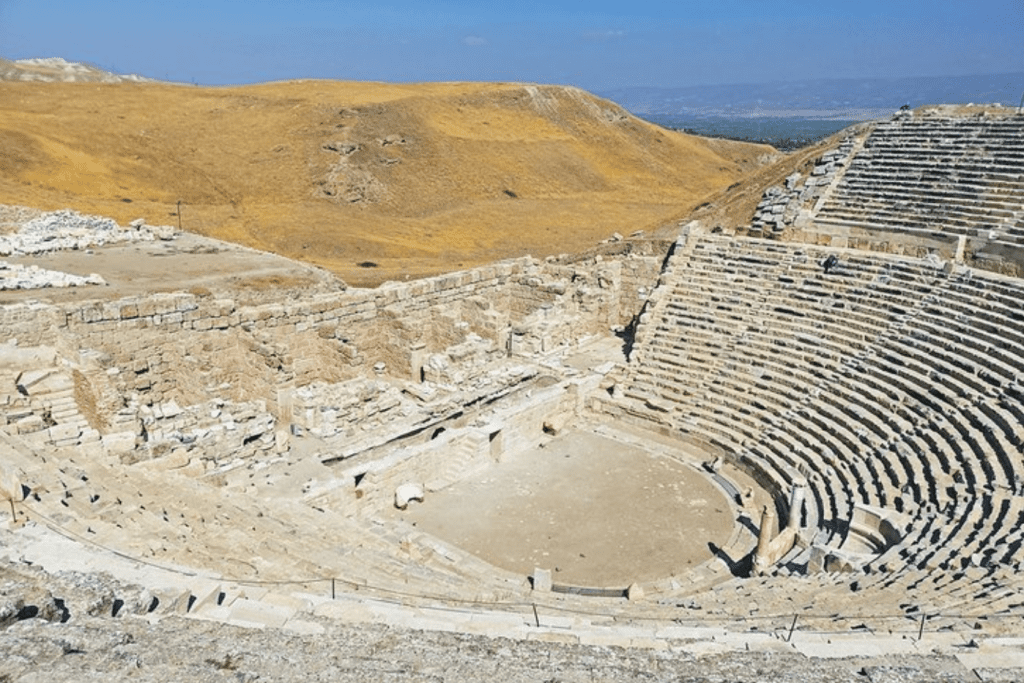 Stadium Street runs south from the west theater. The major highlight monument is the fresco travertine panel wall.  It sits on the intersection of Stadium Street with Syria Street.  It was destroyed and buried by the 494 CE earthquake. The wall dates back to the 3rd-century reign of the Roman Emperor Gallienus.  The wall measures 59 meters long and nine meters high.  Fragments of preserved fresco panels cover the eastern side.  Since 2020, visitors can now view the remains of the wall. 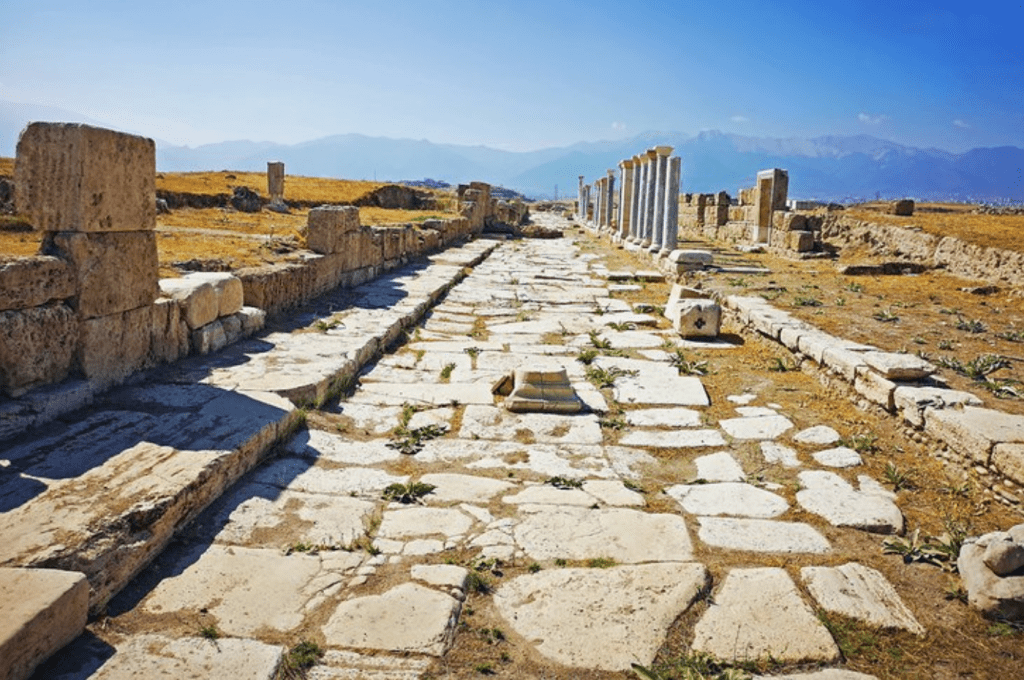 Emperor Vespasian (69-79 CE) constructed many buildings on the city’s southwest side.   These sites include a stadium (350 x 60 meters) and a large building known as the palati.  The palati functions as both a gymnasium and a bathhouse.  An aqueduct brings water from the spring of Baspinar (beside the old administrative offices in Denizli) and to a five-meter-high water tower.  The tower then distributes water to the various parts of the city.  Then, a short distance beyond the city walls, we find the necropolis (cemetery). 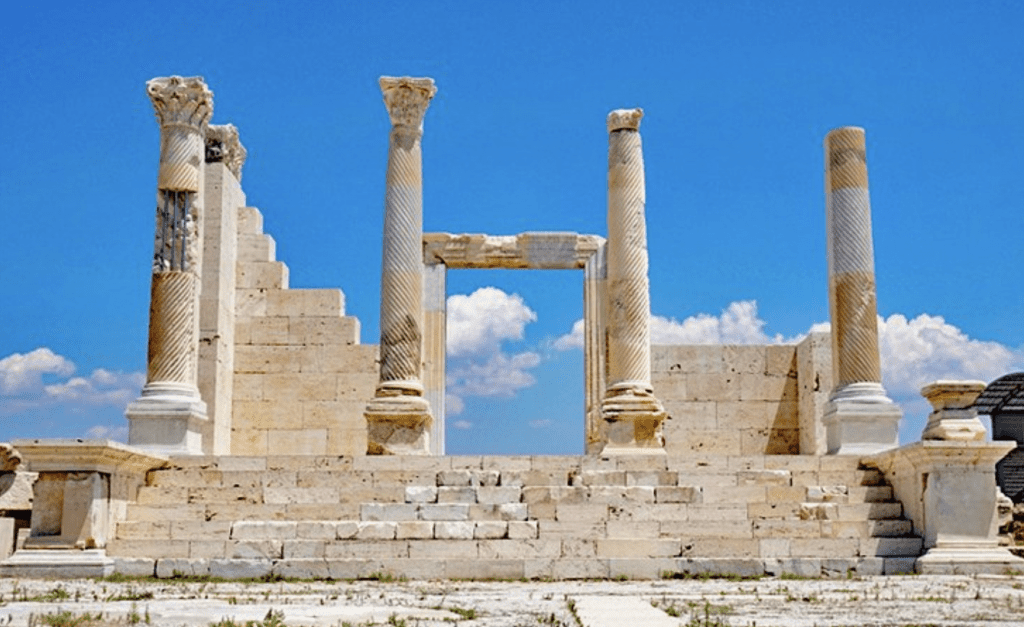 Tonight’s dinner will be at Kayaç Wine House Restaurant Bar for a well balanced meal and a superb glass of wine! 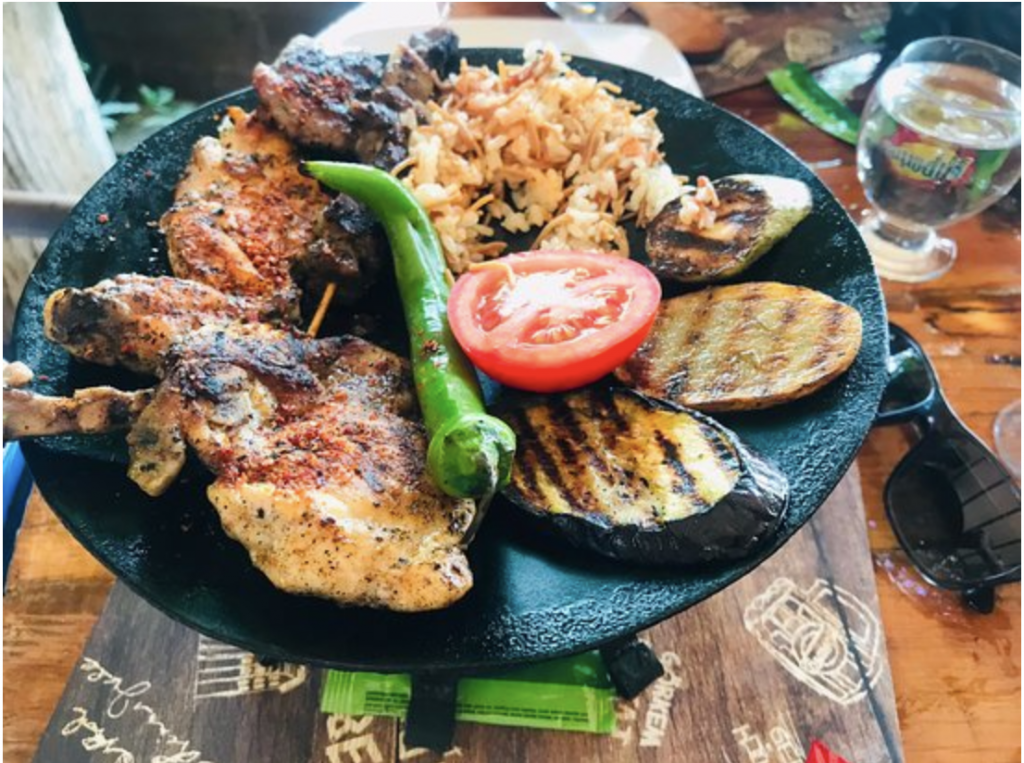 What a day! Time for some shut eye at our hotel, Doga Thermal, before another day of adventure. 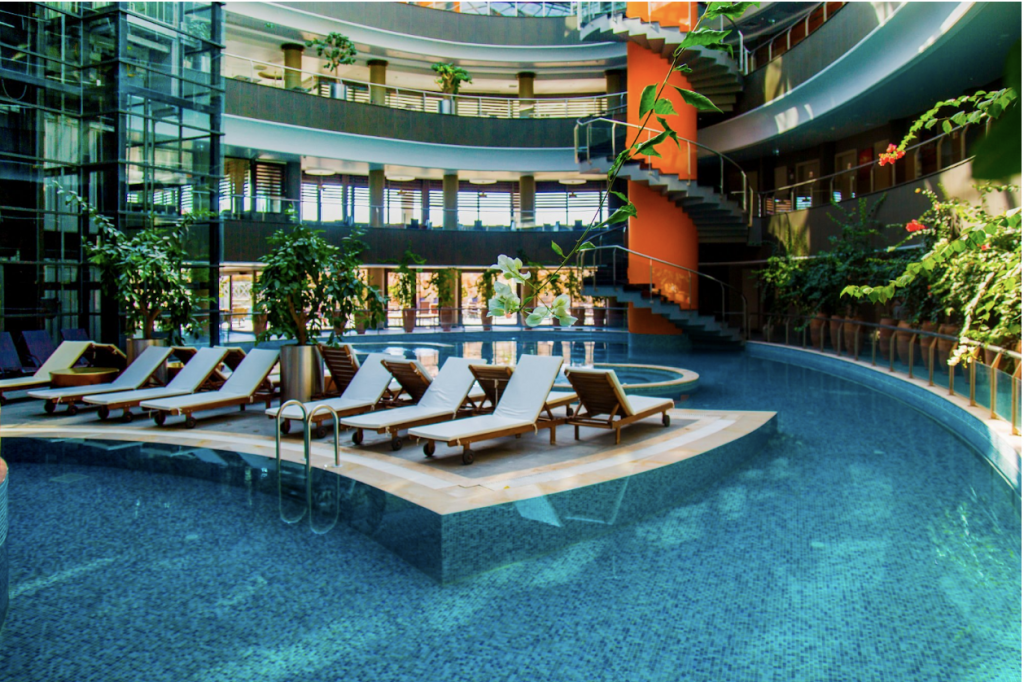 1 point reduction to be rewarded for each team member that eats a Turkish style meal this week.