From Cardio to Cardiac Arrest and Back

From Cardio to Cardiac Arrest and Back

MissionFiT Athlete, Joy Motte, is one our most hardest working athletes…

and she’s got a heck of a story. 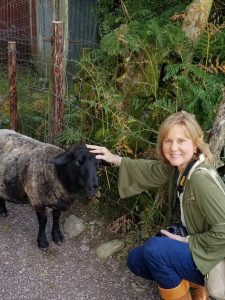 This past April, Joy and her husband, David, visited Ireland to explore her Irish heritage. 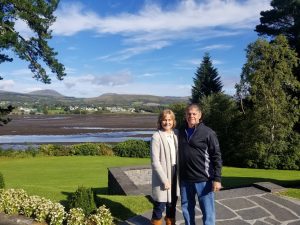 One event on their agenda was to tour the Blarney Castle and kiss the Blarney stone. The Blarney Stone is a block of limestone built into the battlements at the top of the 600 year old Blarney Castle.  According to legend, kissing the stone endows the kisser with the gift of the gab (great eloquence or skill at flattery). The kiss, however, is not casually achieved. To touch the stone with one’s lips, the participant must ascend to the castle’s peak, then lean over backwards on the parapet’s edge. This is traditionally achieved with the help of an assistant. Although the parapet is now fitted with wrought-iron guide rails and protective crossbars, the ritual can still trigger attacks of acrophobia, an extreme or irrational fear of heights. 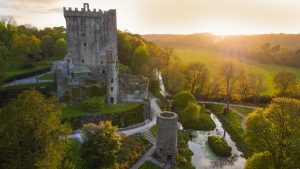 With 127 stairs to climb to reach this stone atop the castle, David collapsed two thirds of the way up due to cardiac arrest.

“Castle staff, who are trained in first aid, gave immediate assistance before Jeremy Downey, a volunteer with Blarney Community First Responders who was working nearby, arrived at the scene, followed soon afterwards by National Ambulance Service paramedics. They administered CPR and used a defibrillator and revived him.  However, given the location and David’s critical condition, an airlift was called.” 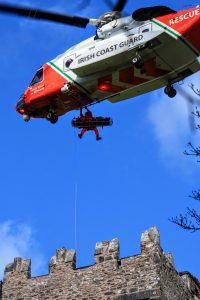 “When David’s cardiac arrest occurred, we were about two thirds of the way up the castle.  The steps to the top are narrow and winding. As we headed up the steps a couple of people had filed in between me and David, so due to the curve of the staircase, I couldn’t see David as we headed up. About two-thirds of the way up, I heard someone yelling “help” – I had no idea at first it was David who needed the help.

David had collapsed on the narrow spiral steps leading to the top of the castle. A couple of tourists were holding him to keep him from falling further down the staircase as they called for help. His heart had just stopped. I remember vividly hearing and trying to process their words regarding the fact that there was no pulse. Several tourists quickly responded and maneuvered David down quite a few steps to get him to a flat area in order to perform CPR. It “happened” that a young police woman from Chicago had just kissed the Stone and was headed down another staircase on the opposite side of the castle. She heard the calls for help, rushed over and immediately began CPR.  In the meantime, a call had gone down to the Castle staff, and a young lady from the Blarney staff grabbed a defibrillator and ran up the castle steps, which was not an easy task! She had been trained to in CPR and how to use a defibrillator just two weeks prior to our visit! 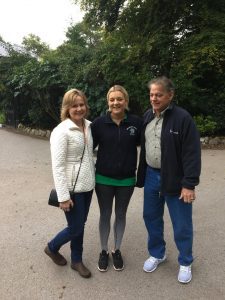 David was, in all reality, dead. I vividly remember how he lay there with his eyes glazed over and the hearing the words repeated – there is no heartbeat – from those working so hard to revive him. I don’t think anyone thought they would be able to revive him, but after about twelve minutes of CPR and shocking him three times with the defib, he responded. Those were wonderful words then, “we have a heartbeat.” 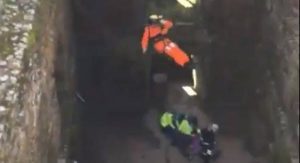 I stood there watching all of this. God provided some sweet people (castle staff, and tourists) who took turns with their arms around me as we stood there. It was surreal. My thoughts were running the gamut of possible outcomes: Would his heart continue to beat? Would there be brain or organ damage after so long of a time? What do I need to do from here to get home from Ireland alone?  But through all of these thoughts, God’s presence and overwhelming peace were obvious! It is hard to describe, but I KNEW whatever the outcome, it would be ok. God was in control.

The rescue took quite a while. The Coast Guard helicopter was called in because there was no way to get a gurney down the castle steps. A rescuer was lowered from the helicopter to the rough stone floor of the castle opening where David was laying. They secured him in the gurney and winched him to the helicopter. They sat him down on the castle grounds so that they could transport him to the hospital via an ambulance. 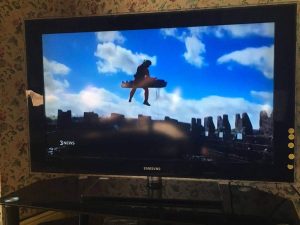 It was while I was sitting in another ambulance waiting that the door of the ambulance was opened by two Irish women – two wonderful women that I have absolutely no doubt that God provided that day.  These two women regularly walk on the grounds of Blarney Castle early in the morning. For “some reason” (God!) that day they walked late in the morning which they never do. These ladies reached out to me – a total stranger – and wanted to help in any way they could. ! I stayed in their homes during David’s hospitalization. They provided transportation for me back and forth to the hospital as needed, fed me and did everything they could to help.  It was amazing the deep friendships that were forged in such a short time!  It was all according to God’s plan. 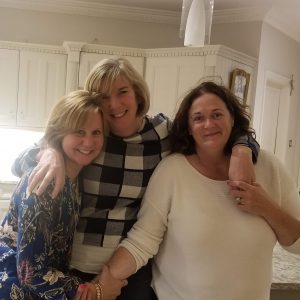 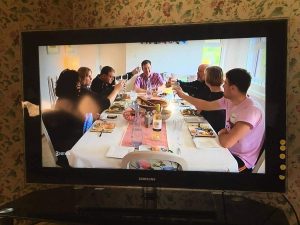 David was treated at the Cork County Hospital in Cork Ireland, where after a couple of days, he was almost “normal” as far as his heart goes. It was determined there were no blockages or damage to his heart – nothing that would require surgery or an extended stay at the hospital. The incident was attributed to a sudden drop in potassium which caused his heart to stop. After many tests (including a cardio stress test) the doctors’ opinions were that he would be okay and could travel back to the States as planned.  So, we actually took the flight home which we had originally booked for our trip! 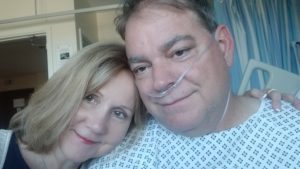 The fact that David had survived with no heart or brain damage was nothing less than a miracle.  Yet, the most incredible thing to David and me is what God did “behind the scenes” in the lives of those who were put in our path – especially one of the incredible women who had “rescued” me that day.  During my stay with her, we were able to have open conversations about God. Her profession of being an atheist was challenged by all of the chain of events and “coincidences” of our story. Even she had to admit that there had to be a God – a God at work that could be seen in all of the “coincidences” of David’s rescue and survival.”

MissionFiT: Thank you Jesus!  David made a full recovery and recently, he and Joy returned to Ireland to finish what they set out to do originally – kiss that Blarney Stone!  And more importantly, they wanted to personally thank those that risked their lives to save his. David has lost 50 pounds through better nutrition and working out four days a week. This time he was ready for the challenge! 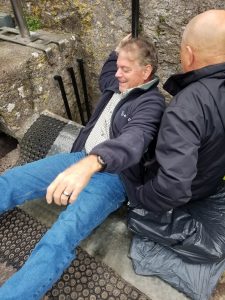 “We went back to Ireland in September in order to thank as many of the Irish people as possible for all that they did. We were met by the media and Blarney Castle staff the day we went to climb the steps again, this time hoping and praying that we would ascend and descend the “normal” way!  Although I have many vivid memories of that day, David had no recollection of even walking up to the castle – he didn’t even recall entering the castle grounds or the beginning of the climb. 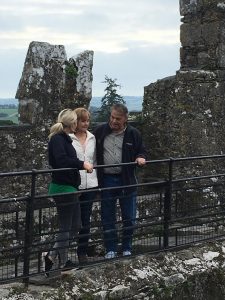 As we approached the castle this second time, a few memories came back for him. So yes, it was emotional – especially for David – to see the actual structure of the castle and realize how difficult the rescue had been and just what a miracle it was that he had lived.  After talking with some of the people involved in the rescue, we were even more thankful to the first responders and to God, of course, who had orchestrated every little detail that day according to His plan.  We realized even more how miraculous it all had been – not just for us, but how God had made Himself known to all those who were involved.  We were overfilled with gratefulness and affirmation that our God is so awesome and that He is ever so present in our lives and can make Himself known in such beautiful ways.

My new friend, the one whom had doubted the existence of God, was one of our biggest encouragers to talk with the media to share our story. We were invited to appear on a national television show before we left Ireland and had decided not to go on the show since we were on the east coast and the studio was all the way across Ireland on the west coast. But after she encouraged us to go, stating “what better way to tell others about God’s love all throughout Ireland,” we felt compelled to go!!  And we did! 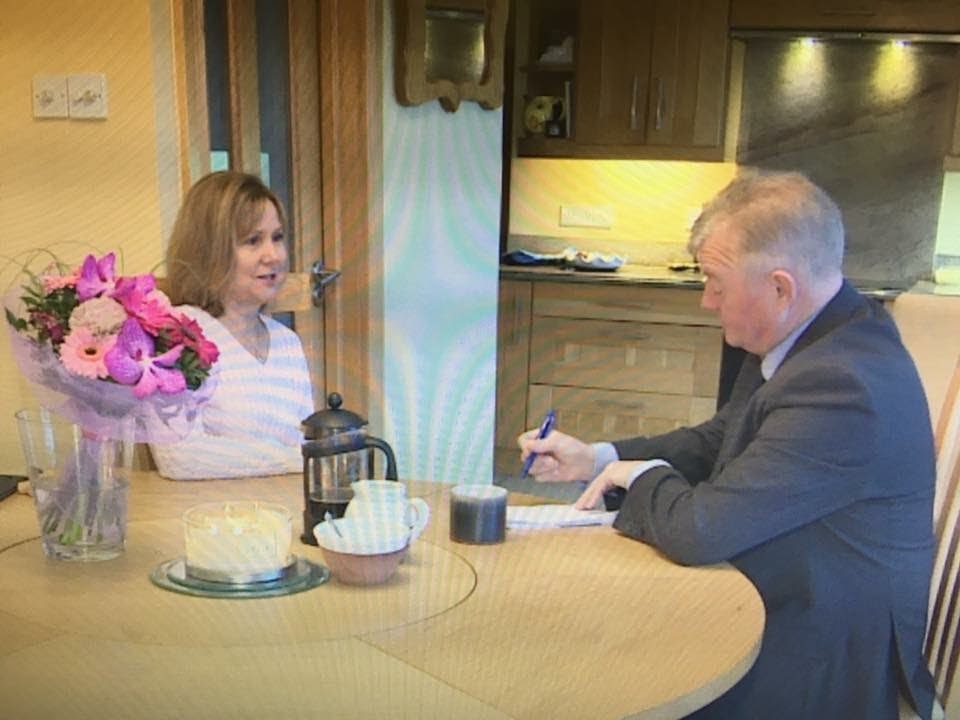 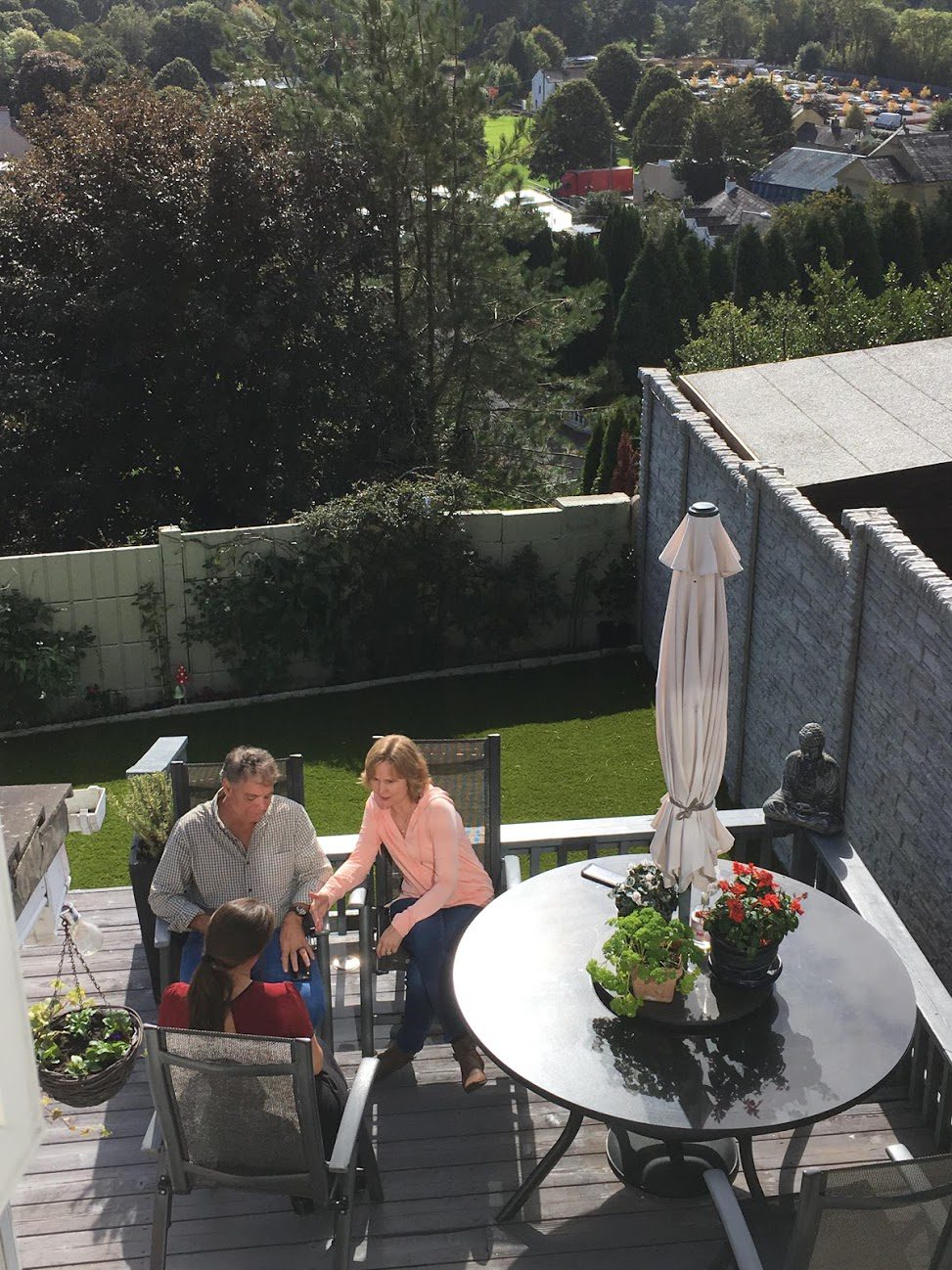 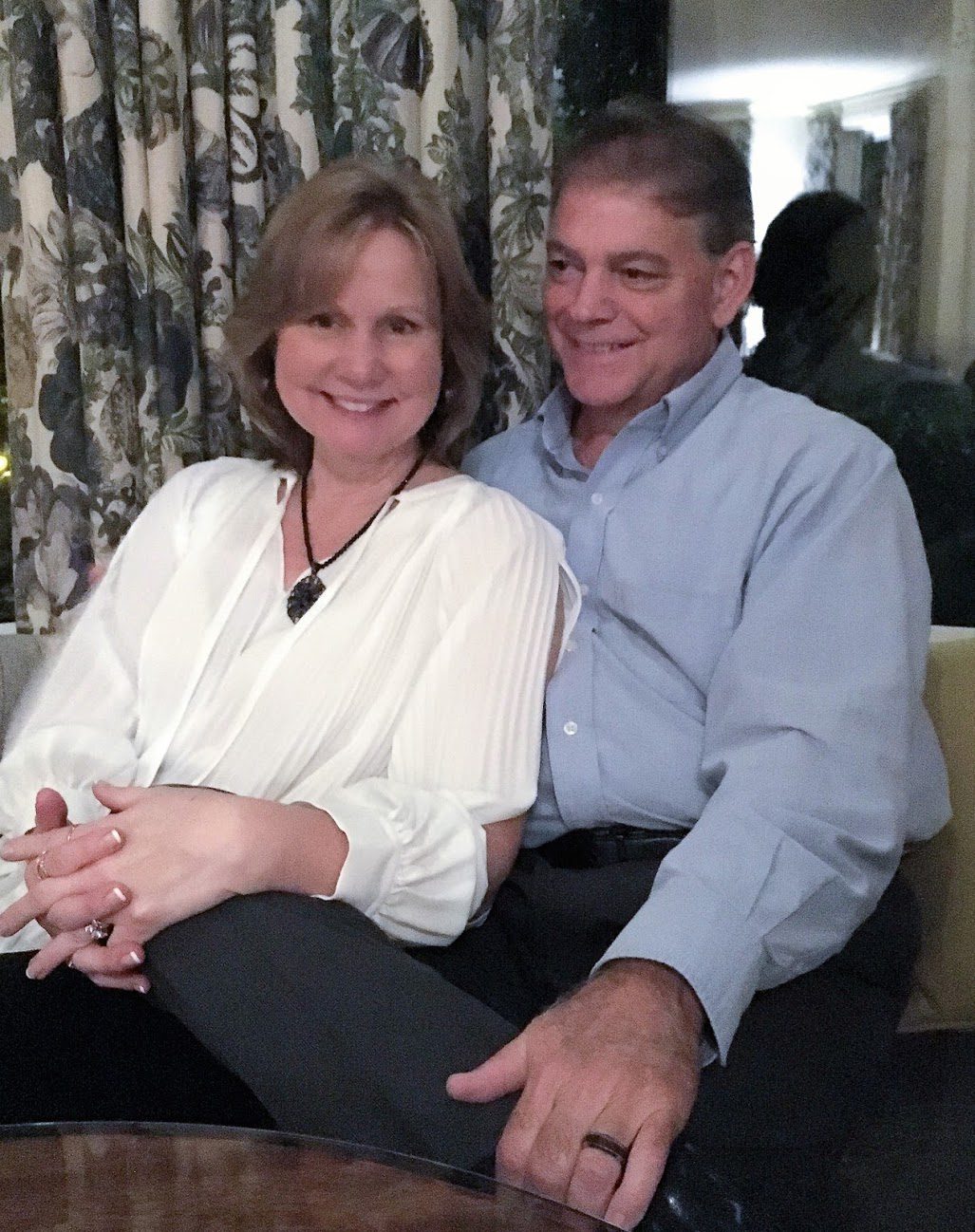 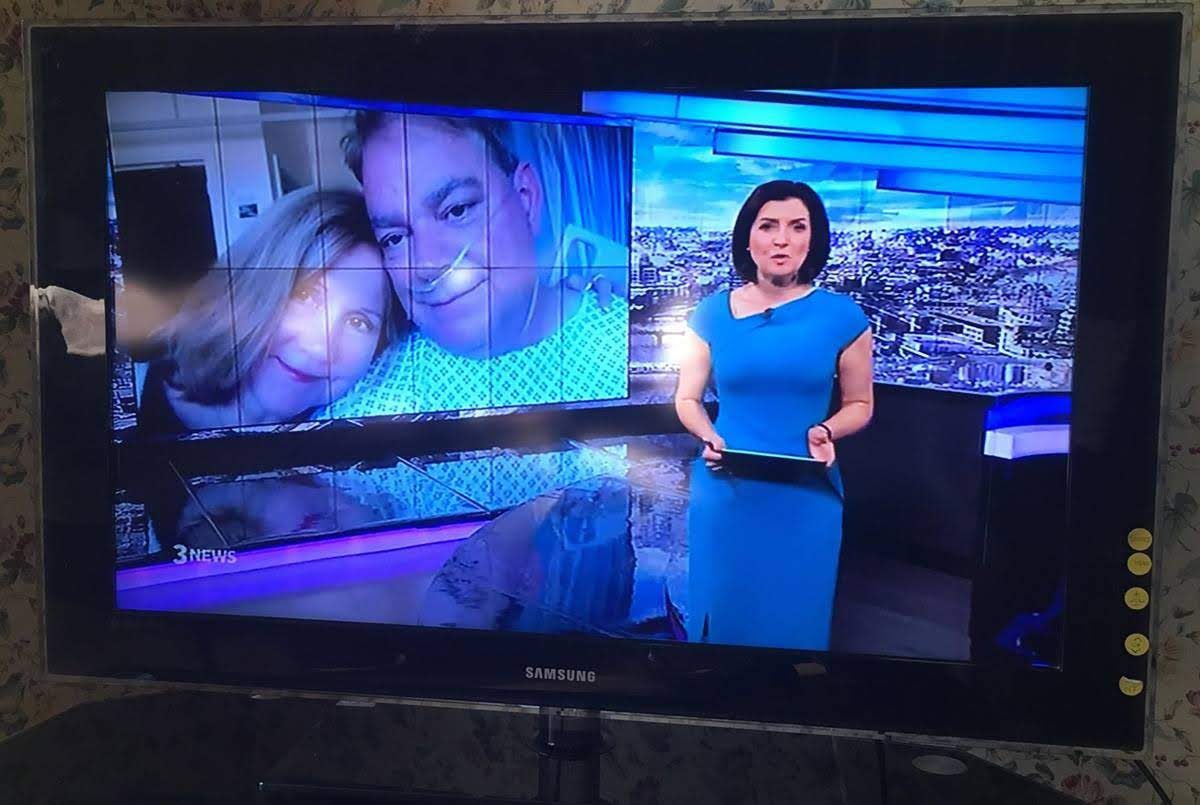 David and I both want to make sure that God receives all the glory, and that was part of our motivation for returning to Ireland. And… we hope and pray that our story there is not finished…but will be continued, as God has placed such a love for the Irish people in our hearts!”

Health then and now…

“I had been doing a lot of walking and was in pretty good fitness shape. I’ve always tried to be conscientious about diet, but not always making that a priority. The climb didn’t really bother me – as far as I remember I was just fine climbing.  We had missed a couple of nights’ sleep due to cancelled flights, etc., so we were extremely tired but running on the excitement of a new adventure.  David used to be very fit and athletic, but over the years had just forgone much exercise and healthy eating. He works at home, so he doesn’t get much physical activity on a daily routine.  He would be the first to tell you that he was totally out of shape.

After the incident, David didn’t have much choice but to get into shape!!  His wife would have it no other way! 🙂  The doctors encouraged him to do cardio rehab, and he did that (three days a week of exercise while being monitored) for about twelve weeks.  When he completed that, he started going to the gym in our neighborhood. He started a diet and lost about 50 pounds. So far, he has maintained the weight loss, and he feels so much better.  He has so much more energy and feels so much better overall.  I also decided to become more serious about health – if we can do things to improve our quality of life and possibly even extend our lives, …why would we not do that?? Doing what we can to maintain good health is an extremely important part of our lives after living this experience!”