Challenge The National Parks! Week 4 takes our intrepid hikers to 6 new parks all across the US.  This week, we stay out west visiting The Badlands and Wind Cave in South Dakota and Black Canyon of the Gunnison, The Great Sand Dunes and Mesa Verde in Colorado.  Come learn more about the beauty residing within our borders during week 4 of Challenge the National Parks!

Week 4 of Challenge The National Parks!  allows hikers to complete various trails by logging miles from the comfort of their local greenways and neighborhoods.  Also sprinkled throughout the trails are different”Special Forces Challenges”.  Each Park’s mileage/challenge must be completed and logged by MissionFiT before hiking the next park.

Here is just a sampling of where our hikers have explored:

Many crisscrossing brown stone fins forming a grid shape. Example of Boxwork in the Wind Cave (Photo by NPS)

Bordered by Custer State Park to the north and the Black Hills National Forest to the west is Wind Cave National Park.  The park is a great example of the prairie lands once traveresed by early homesteaders of the 1800’s.  Wind Cave offers hiking, camping, horse trails and other activities along with regular tours of the cave.  But be prepared!  Tours of the cave can take up to 90 minutes and may be strenuous.  Each tour includes stairs and even crawling at certain points.

Black Canyon of the Gunnison 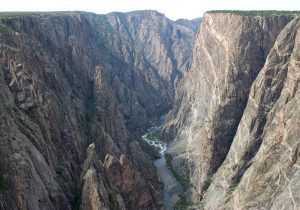 The name of this national park sounds like a pulp western novel.  Maybe that’s because the park’s name comes from expeditions led by Captain John Williams Gunnison.  Gunnison’s last expedition was through the Black Canyon.  Unfortunately, Gunnison and his troops met their demise at their camp in early morning hours. Reports of the incident stated that it was an act of retribution by the sons of a Paiute leader who had been killed by some emigrants heading west.”  However, “one unique statement was heard from a Mormon living in Salt Lake City. She claimed to have heard her fellow Mormons say: “…Captain Gunnison and his party were murdered by the “Danites,” [Mormon group] disguised as Indians, by, and with the knowledge, and “counsel” of the Prophet (Governor Brigham Young).” In the end, Paiute Indians were indicted for the act.”

Dancing In The Dark

Can you imagine being on “desert sand” while surrounded by prairies, forests, mountains and other typical western landscapes?  This is the Great Sand Dunes National Park.  There are many activities waiting for you within the park, including Sand Sledding and Fat Biking.  But the best way to experience 30 square miles of dunes is through hiking. 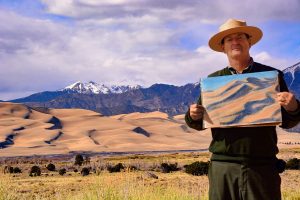 Today, the dunes may be a destination for a sand surfer, but in the 1940’s, the area was used as a proving ground for the US Army during World War II.  The Army found it necessary to test vehicles and other equipment by roaming the sandy landscape.  If you recall your history, the North African Campaign took place in the Egyptian and Libyan Deserts as well as Morocco, Algeria and Tunisia.  In addition, early pioneers built homsteads on the land as early as the 1870’s.  They would have been protected by Buffalo Soldiers, men tasked with protecting settlers and Indians. “Based at nearby Fort Garland, the 9th Cavalry once even evicted white settlers who had encroached on recognized Ute tribal lands.”