Come visit the Rocky Mountains, Carlsbad Caverns, Big Bend (Web Cams) (Big Bend Piasano), the Guadalupe Mountains, the Grand Canyon (Virtual Tour) and the Petrified Forest during Challenge The National Parks! Week 5.  Think about it!  Our MissionFiT hikers have covered about one third of the parks scheduled on this summer’s tour…and it’s only Week 5 of Challenge The National Parks!

Week 5 of Challenge The National Parks!  allows hikers to complete various trails by logging miles from the comfort of their local greenways and neighborhoods.  Also sprinkled throughout the trails are different”Special Forces Challenges”.  Each Park’s mileage/challenge must be completed and logged by MissionFiT before hiking the next park.

Let’s Check Out Some Trails on Week 5 of Challenge The National Parks!

One of the longer trail hikes during Challenge The National Parks! Week 5, the Rocky Mountains hold “355 miles of trails ranging from 7,500 to over 12,000 feet in elevation.”  The vast and beautiful landscape can be challenging to even the most experienced hiker.  Thinner air, colder temperatures.  Experienced hikers can also traverse the Continental Divide National Scenic Trail. “The entire Continental Divide National Scenic Trail corridor is approximately 3,100 miles  long, extending from the Canadian border in Montana to the border of Mexico in New Mexico. About 1,900 miles of the corridor contains existing trails or primitive routes.”  Take a tour through the Park via video. Of course, if hiking isn’t your thing, then you can always tour the RMNP by car. But, be careful!  The natural fauna like to travel the byways, too. 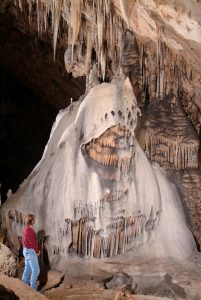 From Colorado, we travel to New Mexico to see Carlsbad Caverns.  Visitors can explore this natural wonder above ground by one of the 11 trails within the park.  But they can also explore what lies beneath, in more than 119 caves—formed when sulfuric acid dissolved limestone leaving behind caverns of all sizes.”  Two trails allow visitors to explore the caves at thier own pace:  Big Room Trail and Natural Entrance Trail.  Both allow visitors to enjoy the wonder and beauty of God’s world underground.  If you prefer a the road less traveled, try a Ranger Guided Tour through one of 4 different areas of the cavern.  But you better make sure you brought your have the right gear.  These tours aren’t for the faint of heart!

Bats make regular flight out of the caverns and can be seen at the park’s Bat Ampitheatre in the early evening, as the sun sets.  However, what goes up, must come down and the Bats come home to roost.  Typically, the park welcomes Brazilian Free Tail bats back their underground home each year, on the third Saturday of July.  Visitors can see them return during the park’s Dawn of the Bats.

Wow!  Look At All The Stars!

Carlsbad also has Night Sky Programs, allowing visitors to see atronomical wonders without the glare of city lights.  Night hikes, viewing stars and constellations and even seeing the International Space Station can all be done within the grounds of Carlsbad.

To the north of Big Bend and the east of El Paso, Texas, you will find the Guadalupe Mountains, packed with 80 miles of trails for day hiking, backpacking, bird watching and more.  What’s more, Guadalupe also welcomes fall foliage each year. Watch a short video about this phenomenon.

Wallace E. Pratt (1885-1981) was a pioneer U.S. exploration geologist.  Pratt helped create Guadalupe National Park by donating more than 5,500 acres to the National Park Service.  This acreage become the core of  Guadalupe.  Pratt started his geologic career in the Philippines, as a miner in 1909.  In 1916, he returned to the United States and worked for Humble Oil, parent company to Standard Oil.  Pratt was a pioneer in the development of geologic work in find oil reserves in the country. “Pratt wrote more than 100 geological papers during his lifetime, including “Oil in the Earth,” one of the most widely read books in his profession.”

Despite it’s name, Ship On The Desert isn’t a “ship” at all.  It just looks like one.  This historic home was built by Pratt as his second home.  Construction started in 1941 and was finished in 1945, after World War II.  Pratt and his wife lived in the home until 1963, when health issues forced a move to Tuscon, Arizona. “Inside the dining room, the captain’s bridge arises from the main deck into a small, glassed-in second story room. Detached from the main building is a two-car garage with a small spare bedroom that was sometimes used as a guest bedroom. The principal construction material was the natural building blocks (McCombs and Radar limestone) collected from the surrounding countryside.”

As the legend goes, Spaniards first explored the area between the 1500s & 1700s in a search for routes between colonies along the Rio Grande and the Pacific Coast.  Many Spanish inscriptions have been found throughout the Petrified Forest.  However, exploration didn’t stop there.  Later, the US Camel Corps followed in previously explored footsteps and wagon trails.  Edward F Beale, a retired US Army officer, was hired by the government in 1857.  For the next three years, he and his camel caravans worked on road improvements and surveys.  Although Beale strongly beleived in the use of camels in the desert, the government decided against the idea. Other sites include Newspaper Rock, a long standing formation used by early people groups as communication.  Even today, petroglyphs can be found on the rock. 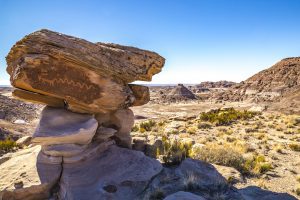 Get Your Kicks on Route 66

Much later, US Route 66, a storied route connecting Chicago to Southern California, once went through the Petrified Forest.  Utility poles, signs of this historic route, can still be found within the park.   However, our MissionFiT athletes are on foot and so must walk any one of the 7 developed trails within the Forest.  But, backcountry hiking is also available for those who like to go off the beaten path.