Challenge The National Parks! Week 2 brings us new natural areas to explore.  Many teams have traveled through at least 6 parks.  Check out the first four parks here.  Keep reading to find out where folks have trekked this week.

The Challenge The National Parks! Week 2 allows you to hike through the trails of our National Parks.  Hikers complete the trail mileage as well as a “Special Forces Challenge”.  Each Park’s mileage/challenge must be completed and logged by MissionFiT before hiking the next park.

Several families are vying for third:  The Childers, The Elmore, The Johnstones, “2 Monks for Cash”, The McRorys, and The Schlottmans 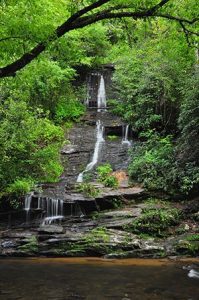 Just 3 hours west of Charlotte lies one of the largest National Parks in the country: the Great Smokies.  Named for the low lying clouds that nestle within the valleys of these mountains, the Great Smokies border three National Forests (Cherokee, Nantahala and Pisgah), the Cherokee Indian Reservation and lead to one of the great summer tourist meccas:  Pigeon Forge, Tennessee.

But for those who enjoy a little peace with their nature, the Great Smokies offer lots of trails, camping, creeks, and many more destinations.   Take a look at the trails within this beautiful, natural park. 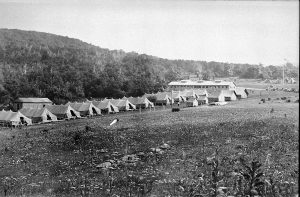 Shenandoah National Park was officially established in December 1935.  But only two years before, the land encompassing what would become the park was built by the one of the first Civilian Conservation Corps established by President Franklin Delano Roosevelt.  These camps were home to over 1,000 boys and young men who were “supervised by the Army and worked on projects directed by the National Park Service and the Bureau of Public Roads”.

Today, the park, which runs length-wise east of I-81 from Staunton, Virginia north to Front Royal, Virginia (off I-66) is home to five campgrounds and 15 different areas containing a myriad of trails for you to explore. 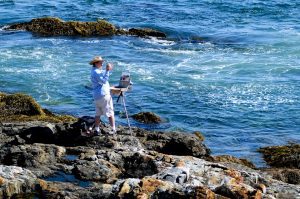 A painter using a smartphone to snap a photo of the coastline in Acadia. Photo by Lise Griel

“Acadia National Park protects the natural beauty of the highest rocky headlands along the Atlantic coastline of the United States, an abundance of habitats, and a rich cultural heritage.” Acadia, located near the “island paradise” that is Bar Harbor, Maine, is one of the 10 most visited parks in the US.

Though one of the smaller parks, Acadia offers plenty of trails to explore , and other outdoor activities including EarthCache.  EarthCache, an interactive “game” of sorts, allows  you to explore the entire park using a GPS while locating different clues about the park, its storied history and geographical significance.  But be warned, this is an all-day family event, taking about 4-6 hours on average.  The payoff?  An opportunity to spend quality time with your family, friends or special someone! 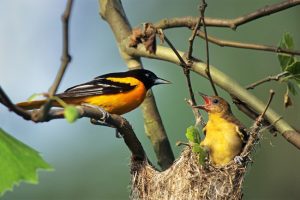 Baltimore Orioles make a comeback along the Cuyahoga River. Photo by Jim Roetzel

Following the Cuyahoga River north of Akron, Ohio, the Cuyahoga National Park is home to a wide variety of flora and fauna, specifically avian life. Through photography, Jim Roetzel captures the beauty of our fine, feathered friends as they nest and nestle along the river.

Even if you aren’t traveling through Ohio, you can learn the best pro-tips on Photographing Wildlife from Your Car.

The Cuyahoga River Valley was part of the Ohio & Erie Canal System, first established in the early 1800s.  The Erie Canal, linking the Hudson River and Lake Erie at Buffalo, NY, was built as an early transportation system, ferrying people & goods along the river.  By 1825, plans were underway to link Lake Erie to the Ohio River.  The Cuyahoga River basin was one of two waterways that would help open the “new” territory to settlers, immigrants, and commerce of all types.

Today, the Ohio & Erie Canal serves as the “spine” of the Cuyahoga National Park.