ReStart Your Heart The Wrap Up from Class #12 Well-Lesson 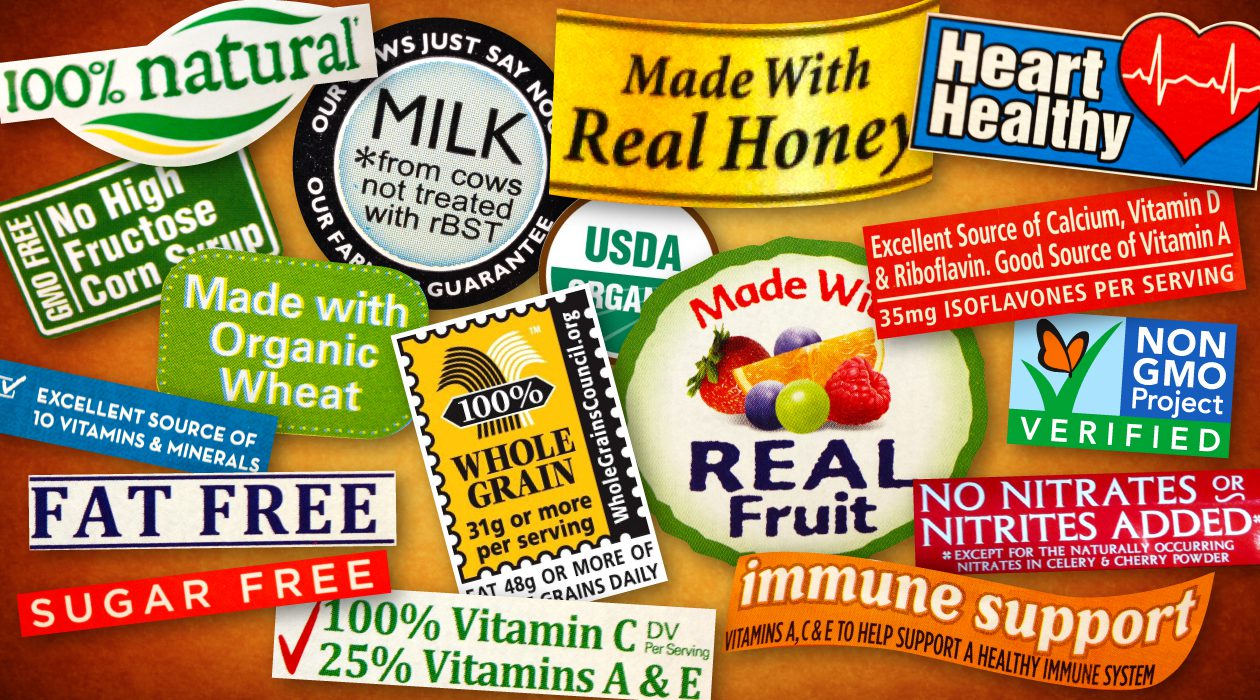 Have you ever picked one grocery item over another because of the health claims on the label? You may have been duped. That’s because terms like fat free or all natural are often slapped on a food item that may not be healthy at all. 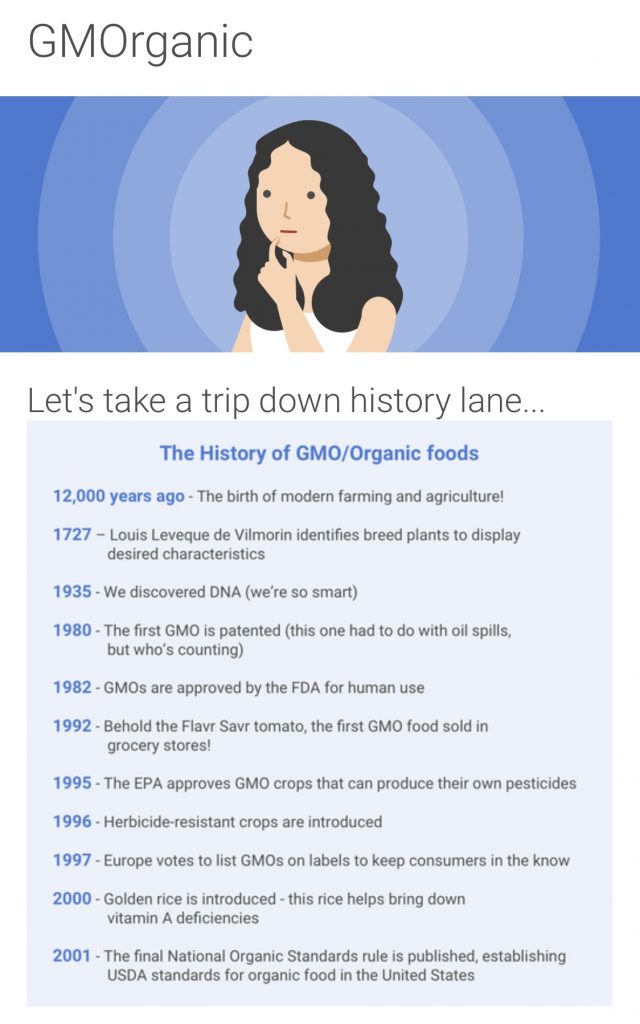 Don’t be fooled, all natural doesn’t mean all that much. The term is completely unregulated. This means the big food giants can call anything natural if they want to. All natural  Frosted Flakes, anyone?The Food and Drug Administration doesn’t define it, although food makers won’t get in trouble as long as so-labeled food doesn’t contain added colors, artificial flavors, or “synthetic substances.”

That means there’s room for interpretation.

So a food labeled natural may contain preservatives or be injected with sodium, in the case of raw chicken. “Some natural products will have high fructose corn syrup and companies will argue that since it comes from corn, it’s healthy,” says Stephan Gardner, director of litigation at the Center of Science in the Public Interest (CSPI). “Well, that isn’t true.”

Foods with a Non-GMO project stamp of approval are made with Non-GMO ingredients. There are a number of approved GMO crops including corn, soybeans, canola, alfalfa, and more. So if you see corn chips with a stamp, it means they were made with real deal corn. 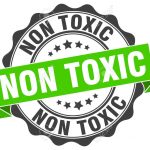 Just because something hasn’t been linked to toxic responses, it doesn’t mean it’s good for you.

Non-GMO is a legitimate thing, but GMO-free is impossible to claim due to testing limitations – trace amounts of GMO ingredients may be present in Non-GMO Foods. 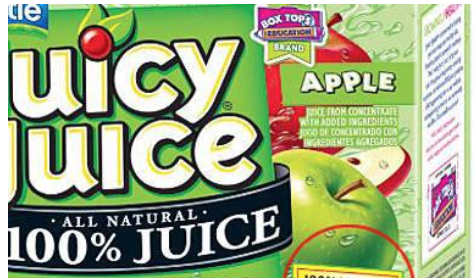 If you’re concerned about calories and carbs (maybe because you have diabetes or are trying to prevent it), you may toss no sugar added products in your grocery cart.

But foods, including fruit, milk, cereals, and vegetables naturally contain sugar. So although these products may not have added sugar they still may contain natural sugars. And no sugar added products still may contain added ingredients like maltodextrin, a carbohydrate.

Carbohydrates—which can be simple sugars or more complex starches—raise blood sugar, and no sugar added doesn’t mean a product is calorie- or carbohydrate-free. 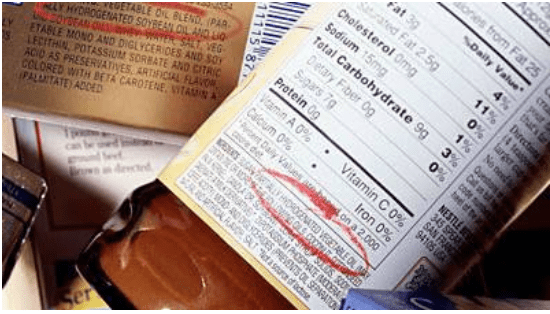 Sugar free doesn’t mean a product has fewer calories than the regular version; it may have more. (Although food makers are supposed to tell you if a product isn’t low-cal). Sugar-free products have less than 0.5 grams of sugars per serving, but they still contain calories and carbohydrates from other sources.

These products often contain sugar alcohols, which are lower in calories (roughly 2 calories per gram, compared to 4 per gram for sugar), but compare labels to see if the sugar-free version is any better than the regular version. (Common sugar alcohols are mannitol, xylitol, or sorbitol).

Caution: Sugar alcohols can cause diarrhea so don’t consume a lot in one sitting.

Trans fat is bad for your heart, and the ideal intake is zero. But products that say no trans fat can actually contain less than 0.5 grams per serving.

“If a product says 0 trans fat on it, it isn’t actually at zero,” says Gardner. “If the consumer were to have two servings, then you would get a good amount added to your diet.”

Check for words on the ingredient list such as hydrogenated oils and shortening, which mean trans fat is still present. There are some products that are more likely to contain trans fat than others. 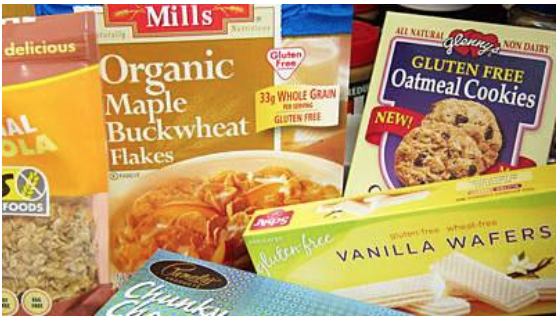 Gluten is a protein found in grains like wheat or rye and it can wreak havoc on the health of those with celiac disease or gluten intolerance.

Gluten-free products are becoming easier to find, which is great for those with gluten intolerance. For everyone else though, there’s no advantage to buying them. In fact, gluten-free whole grains may have less fiber than the regular version.

“Unless you have metabolic problems, gluten-free products don’t help you lose weight and are not necessarily good for you,” says Taub-Dix. “But because it’s a buzz word, it’s put on packages.” 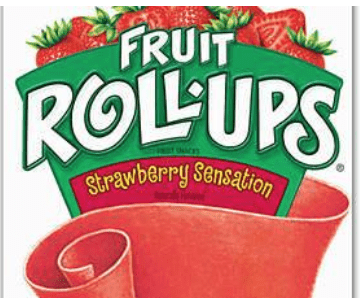 Made with Real Fruit:

Products that claim to be made with real fruit may not contain very much at all, or none of the type pictured on the box.

While companies must list the amount of nutrients they contain, such as fat and cholesterol, they do not have to disclose the percentage of ingredients, such as fruits and whole grain, according to CSPI.

In 2012, a California woman filed a class-action lawsuit over Fruit Roll-Ups, which contain “pears from concentrate” and no strawberries (in the case of the strawberry flavor).

Although the FDA has definitions for terms like reduced sugar, no added sugar, and sugar free, companies sometimes come up with marketing lingo that is, well, just made up.

One of those terms is lightly sweetened, which isn’t defined by the FDA.

“Whether Kellogg’s Frosted Mini-Wheats Bite Size is “lightly sweetened” should be determined by federal rules, not the marketing executives of a manufacturer,” according to a CSPI report from 2010.

Cholesterol is made by the liver, so only animal products like meat, dairy, eggs, and butter can contain it. If a plant-based product (such as corn oil) touts its cholesterol-free status, there’s no benefit compared to other vegetable oils, which also don’t contain it.

Companies are sneaky. To get around the FDA’s regulation of the word “ healthy” and still imply their product is good for you, they’ll use words like nutritious, wholesome, or helpful. Nope, “healthful” Coca-Cola isn’t a thing. If Pepsi wanted to label all their bottles with “nutritious”, no one could stop them.

Food manufacturers can be tricky with serving sizes. To make a product look low in fat or calories, they may list information based on a tiny, unrealistic serving size.

And FDA recommendations on serving size, the Reference Amount Customarily Consumed (RACC) index, tend to be outdated, based on eating habits of decades past. For example, the RACC for ice cream is a half-cup, or one scoop—a lot less than what most people now eat in one sitting. For example, a pint of ice cream would be considered to have four half-cup servings, a buzz kill for those of us who could eat the whole thing in one sitting.

If you are a two-or-more scoop kind of person, double, triple, or quadruple the label’s calorie and fat information as needed. 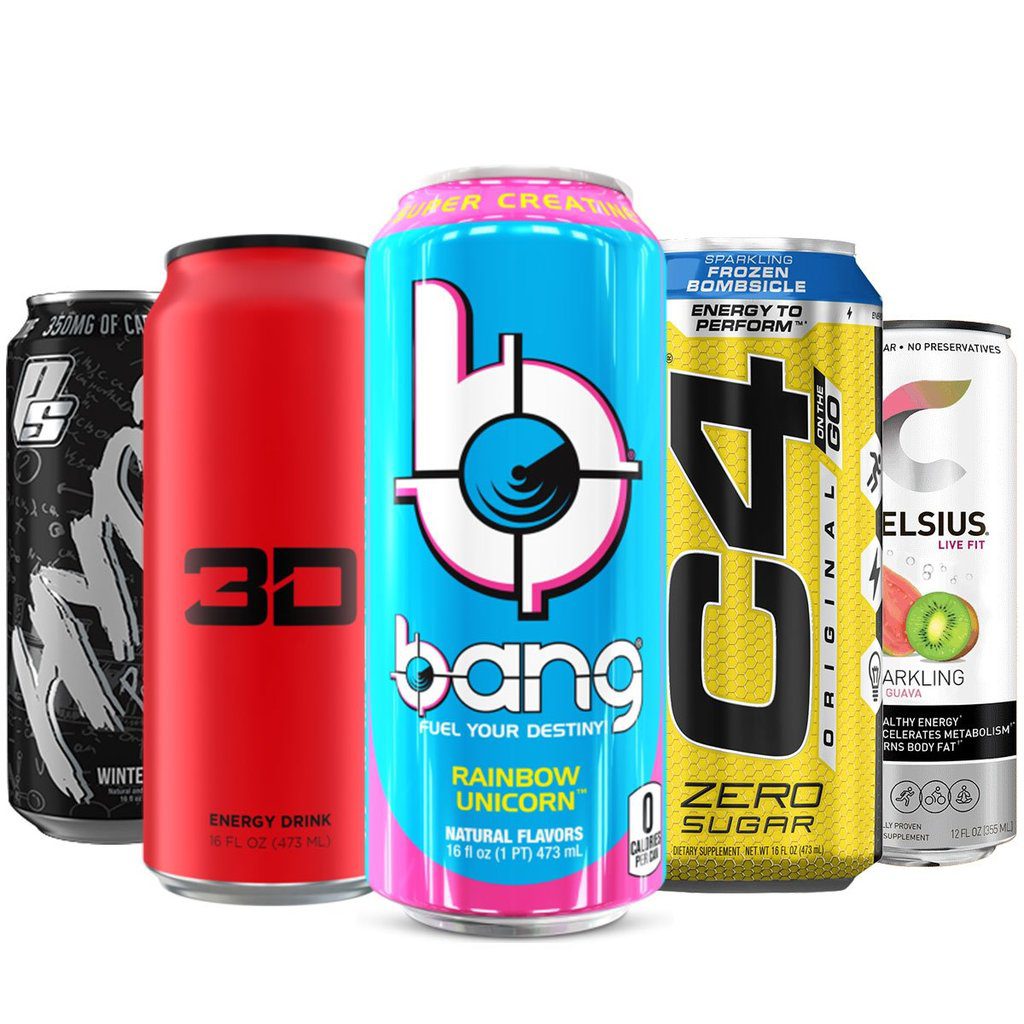 Their labels say they contain various herbs, minerals and the amino acid taurine, specially designed to boost your energy by the time you reach the bottom of the can. But if you look at the ingredients, you’ll find that the main ingredients in most energy drinks are actually caffeine and sugar — making them hardly more than high-priced soft drinks.

Yet their glitzy designs and claims to improve your performance, concentration and reaction speeds seem to be working. In 2004, energy drinks overtook bottled water as the fastest-growing category in the beverage business. Similar products have even been introduced for kids as young as 4 years old.

“This is shameful marketing,” said Madelyn H. Fernstrom, associate professor and director of the University of Pittsburgh Medical Center Weight Management Center, of KickStart Spark, one such product specifically marketed for children 4 years and older.

“Under the guise of ‘good health,’ this is a promotion of caffeine consumption, which will likely have a biological effect on most children who consume it, since their intake is low â€¦ There’s nothing that’s redeeming in any of this stuff. At the very least it’s a huge waste of money,” she said.

Yogurt is harmless, right? Turns out, your favorite breakfast may not always be the best choice. Because of yogurt’s naturally tart taste, companies throw in fruit, honey, sugar, and other flavor boosters to balance it out and make it more appealing. Turns out those delicious fruit-on-the-bottom yogurt cups are one of the worst routes you can go, with some containing as much sugar as a candy bar. Bypass the brightly packaged fruit-filled yogurts and reach for plain, unsweetened yogurt. For a good source of protein, healthy fat, and stomach-pleasing probiotics, try out a plain Greek yogurt. If it’s too tart for your taste, stir in a sliced banana or a handful of blueberries.

Dieters often try to increase their protein levels to keep them fuller for longer, so it makes sense that turkey would be on the menu. It’s one thing to eat leftover Thanksgiving turkey and quite another thing to consume packaged deli meats everyday. These meats are packed with sodium and preservatives. 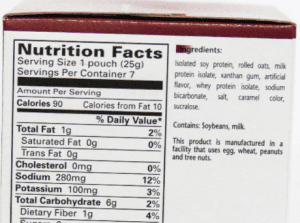 You may be trying your best to be healthy by grabbing a packet of cinnamon apple oatmeal rather than skipping breakfast or giving into the temptation of the Dunkin’ Donuts on your way to the office. While instant oatmeal may beat the alternatives, keep in mind that those packets of flavored oats aren’t doing you any favors either. Often high in sugar and processed and chemical ridden. Instant oatmeal is low in fiber and protein, which means you’ll be starving by mid-morning. If you can, eat steel cut oatmeal. But still remember this is low in protein and high in carbs.

Smoothies and juices may be on your guilt-free list, but some variations should be treated more like a milkshakethan a fruit or veggie-based drink. This includes those green variations that claim you can get your fill of veggies without actually having to eat any. To hide the bitter, earthy taste of kale, spinach, carrots, and beets, companies throw in a hefty dose of sugar or fruit to make it go down easier. Some of these smoothie-like juices pack upwards of 50 grams of sugar per bottle. If smoothies are one of your go-to meals or snacks, make them at home where you can control what ingredients go in.

It’s much better to eat your calories than drink them. When juicing, often the pulp is pulled out, which you’re losing a lot of the nutrients. Also, the body gets a lot more out of digesting the fruit/veggies. With juicing the body doesn’t have to work very hard, hence burning less calories in the process. 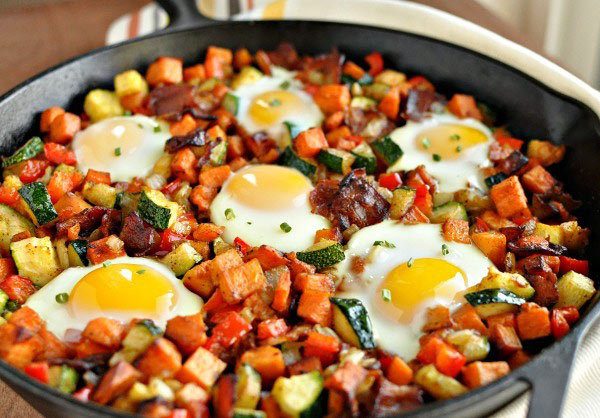 Now, let’s further equip you for making some great choices when it comes to breakfast!

***Be sure to review the recipes in the E-CookBook. LOTS of great recipes. 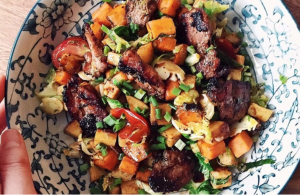 *Add some protein powder in the mix. 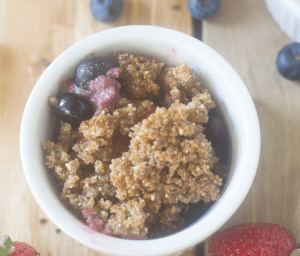 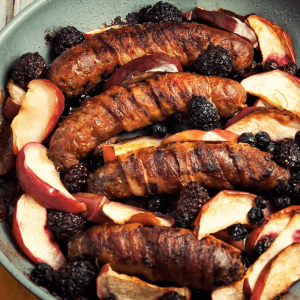 *Add some protein powder in there 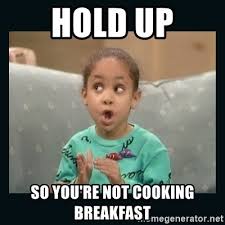 Login
Accessing this course requires a login. Please enter your credentials below!
Lost Your Password