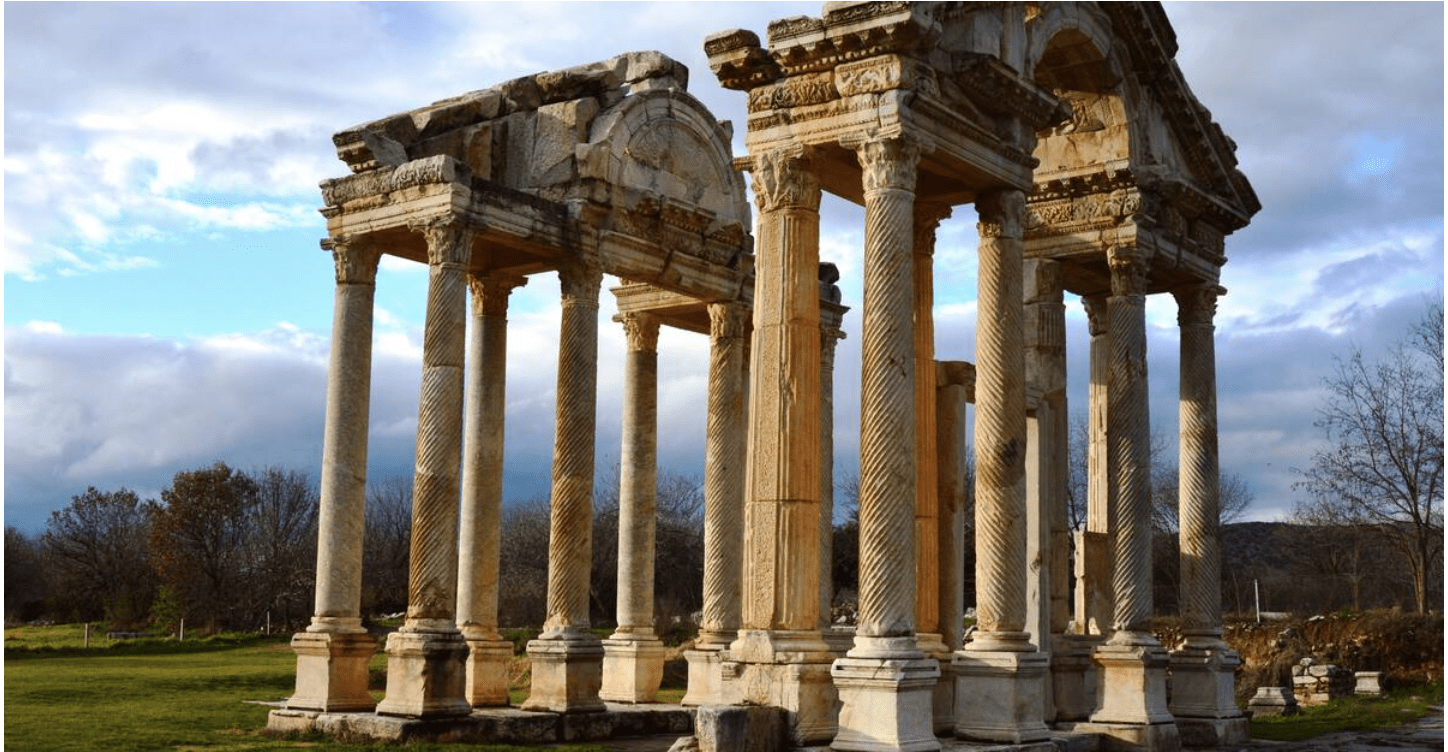 Aphrodisias is about two hours east of Turkey’s mid-Aegean coast along the Meander Valley. The longest and most important Jewish inscription from antiquity  was discovered there in 1966.  It stood outside unprotected from weather, until the inscription was brought inside the site’s elegantly expanded museum in 2010 .  The marble column is useful for two reasons.  First, just for it’s own value.  Second, the inscriptions help one to understand Paul’s actual missionary program, which is distinct from Luke’s portrayal of it in Acts.

Aphrodisias was once a thriving Hellenic and Roman city in what is now modern day Turkey. Today, Aphrodisias is an archaeological site.  The ruins include remains of a beautiful ancient stadium. 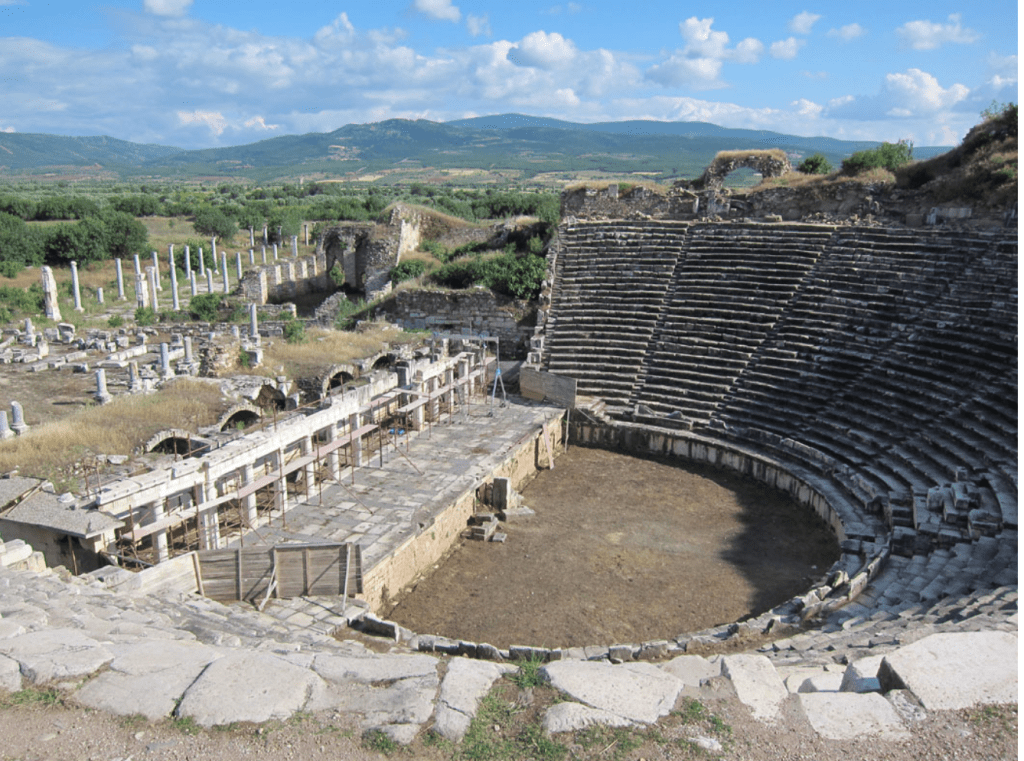 The renovated Tetrapylon greets you upon arrival.  It is a gateway of Corinthian style columns complete with reliefs of the god Eros and goddess Nike. The stadium dates as a far back as the 1st century BC.  The preservation is beautiful.  As well, it is one of the biggest ancient constructions that still survives.   It holds 30,000 people.

The Temple of Aphrodite would have been in the busy heart if the city. Over 40 columns of the temple were part of the original structure.  This number gives a great sense of the scale of the original building.  The Temple became a Basilica in the 5th century AD with the Roman conversion to Christianity.

There is also an onsite museum featuring thousands of pieces of Aphrodisian art including busts, decorative and religious sculpture and ceramics.   In addition, there is a unique figure of the goddess Aphrodite herself.

Other features of the ruins include the Odeon and the baths of Hadrian.  Also, look for the 8,000-seat theatre that was adapted for gladiatorial combat in the Roman period.  But keep an eye out for some 2,000 Roman inscriptions still decipherable around the ruin. 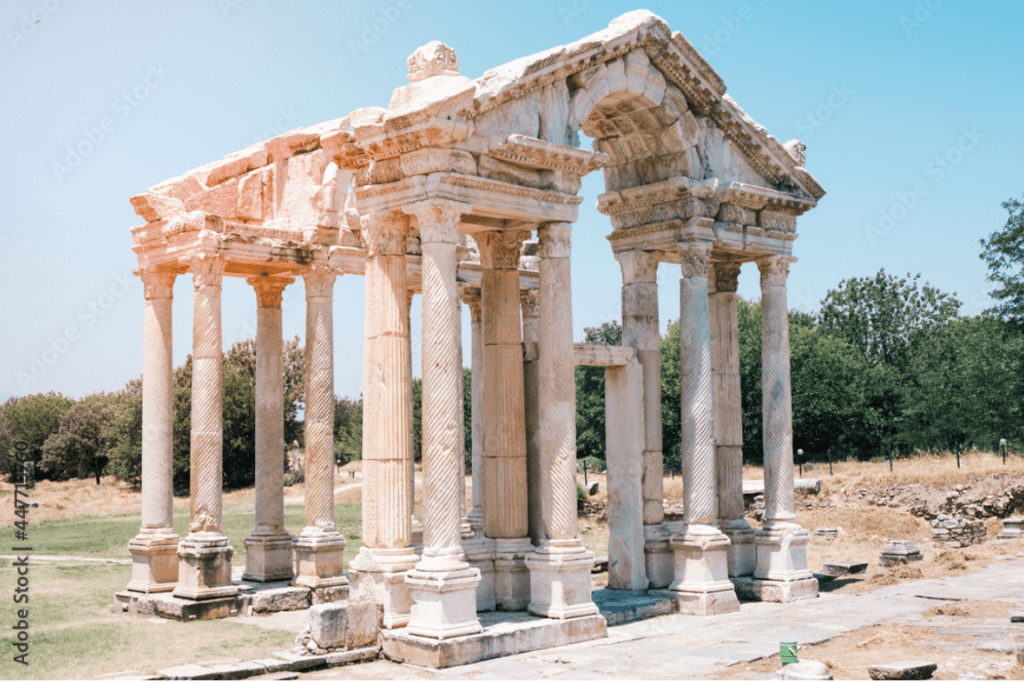 In the Latin language, tetra means “four“, and pylon means “door“. This monumental structure has an entrance with 4 columns.  Participants in the ceremony procession gathered there before going to the temple.  The extraordinary techniques of Aphrodisias’ sculptors are standouts in the building’s construction.  Construction took about 150 years to finish.  As well, 80% of the original pieces help complete the restoration of this monumental door. 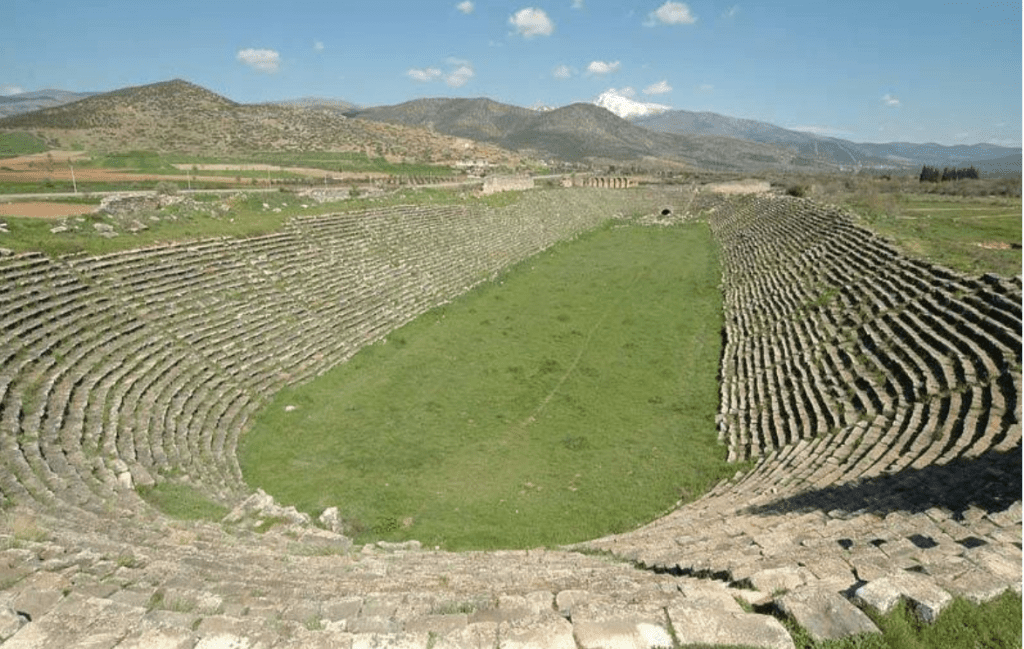 One of the most striking works in Aphrodisias is the magnificent stadium with the capacity to seat 30,000 people. The structure is approximately 270 meters long and 50 meters wide.  As a result, it’s elliptical shape gives many spectators the opportunity to watch the shows perfectly.

This stadium is an important structure as it is one of the best preserved ancient stadiums in Turkey, as well as around the world!     Audiences could see  javelin throw, discus and other Greek athletic competitions there.  In addition, it has been used for large public voting and festivals.

Although the population of Aphrodisias was about 25,000.  But the stadium’s high capacity explains why many spectators visited Aphrodisias. Like all visitors to new place, they came to watch the shows and competitions.  As a result, they were an important factor contributing greatly to the economy of the city.

TEMPLE OF APHRODITE IN APHRODISIAS 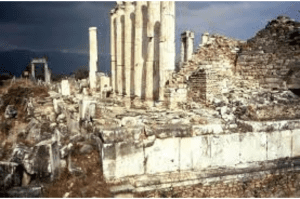 The temple is one of the important buildings of the ancient city of Aphrodisias.  It was built in the archaic period. When the Assyrians came to Anatolia, they started to settle in fertile lands.  Of course, they brought their goddesses Istar, goddesses of love and beauty.

Excavations in the temple have unearthed the descriptions of the king and queen of the period. Archeological work shows that construction of the temple began in 1st Century BC and completed around 130 AD. In addition, Emperor Hadrian enlarged the temple with sacred walls.

The temple has been one of the important pilgrimage centers in Anatolia for years since for those who took refuge in it, the temple was protection.

The statue of Aphrodite, one of the most special pieces belonging to the temple.  It is in the Aphrodisias Museum. There are many different reliefs and symbols in the statue, which resembles the Ephesus Artemis. Later, the temple of Aphrodisias was converted into a church.   As well, the spreading of Christianity allowed for changes made in it around 5th century AD.

Tonight’s dinner will be at Anatolia Restaurant. 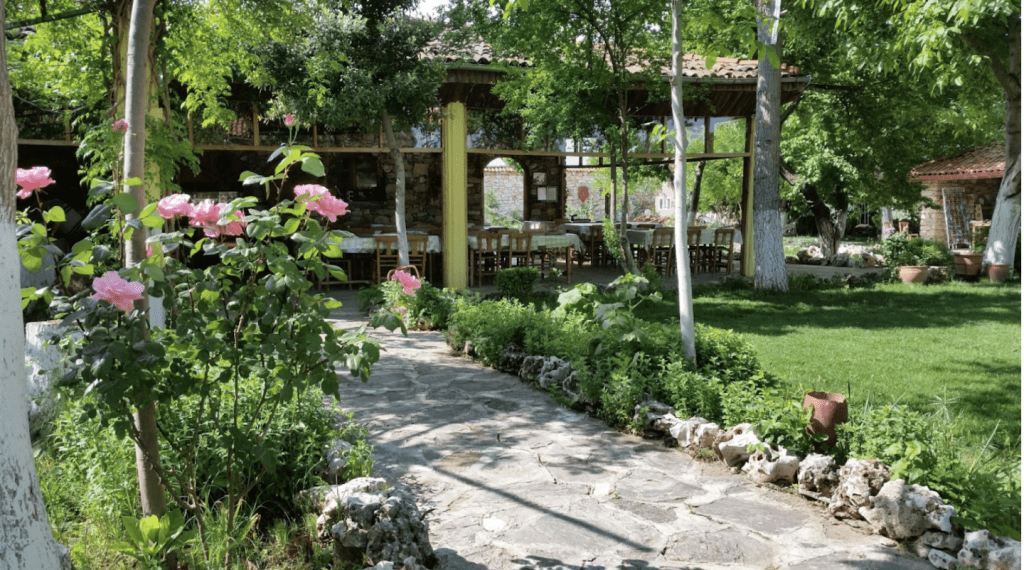 We will be having their top notch, ‘Doner Gyro’!

A traditional Turkish gyro served on pita bread with mixed greens, tomatoes and pickled onions. Top that off with our homemade tomato and yogurt sauces.

What a day! Time for some shut eye at our hotel, The Venus Suite, before another day of adventure. 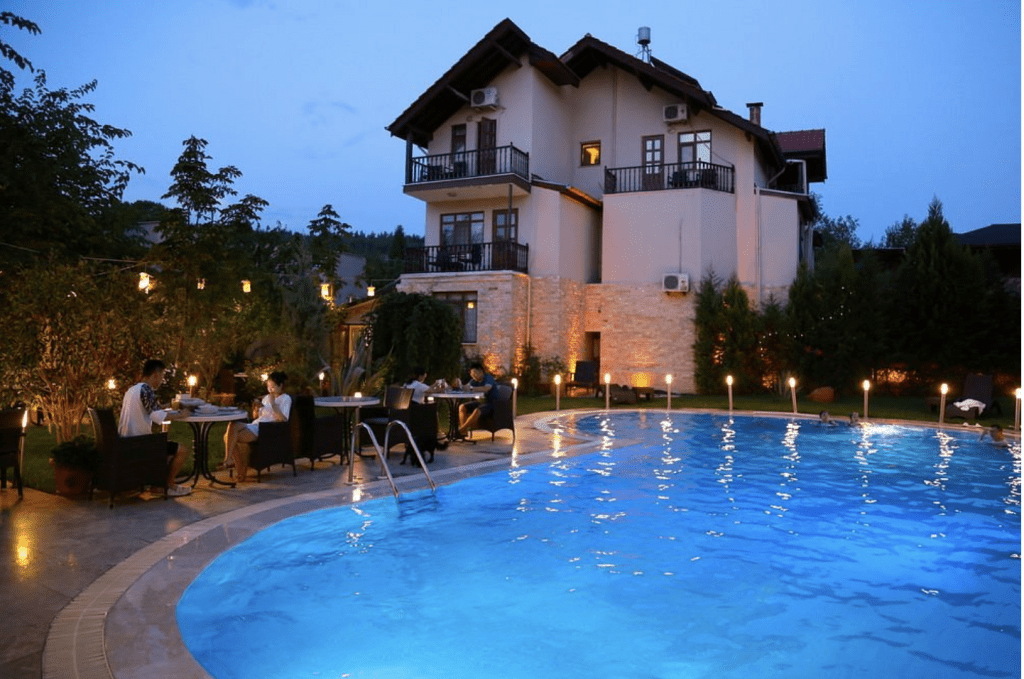 Solve this riddle without looking it up:

What is seen in the middle of March and April that can’t be seen at the beginning or end of either month?

1 point deduction from this week’s score as a bonus.

However, we are only going to challenge you to go 22.3 miles!