There might be an overall winner of MissionFiT’s Summer event, but teams are still challenging these National Parks:  Yosemite and The Pinnacles, both located in California.

Which team will finish next? 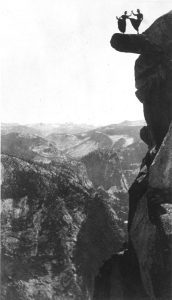 Although best known for the Frazil Ice Waterfall and the Horsetail Falls, if you can do it outdoors, you can do it at Yosemite.  With every activity from Art & Photography to Winter Sports, Yosemite has something for everyone during every season of the year.  However, if you find yourself short on time, the best way to see the park is to drive.  Within the 1200 square mile park are many different twisting turning roads offering spectacular views  to visitors.

A Diverse Park with an Equally Diverse History

The histories of the people within the park have helped make the park what it is today.  Included in those stories are Buffalo Soldiers.  About 500 soldiers from two Calvary and two Infantry Regiments were assigned as park rangers in both Yosemite and Sequoia beginning in 1866. 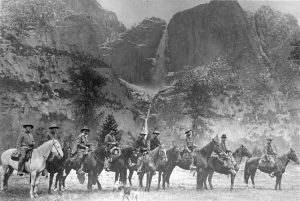 A Hotel Becomes a Naval Hospital?

“Yosemite’s luxurious Ahwahnee Hotel was the brainchild of the National Park Service’s first director, Stephen Mather.”   But Mather’s ideas of fine resort living for the wealthy were slow to sell.  The property was developed over time to include a golf course and tennis facilities.  However, in the late 1930’s things looked bad.  Then came World War II.

The US Navy To The Rescue!

“The Department of the Navy offered a long-term arrangement to rent the entire hotel.  The Ahwahnee was one of several sites the Navy surveyed in the summer of 1941 for emergency conversion to wartime hospitals.”  The idea was a good one, but not practical, especially those with shell shock.   “As one early staff member recalled, “If the patients weren’t nuts when they got to Yosemite, the boredom there soon sent them over the edge.”   But a change in Naval leadership brought changes to the Ahwahnee, including a vast array of entertainment and excursions.  The hospital was decommissioned in 1945.  But the “Yosemite Special Hospital experiment was a watershed event in the development of U.S. military medical rehabilitation techniques.” 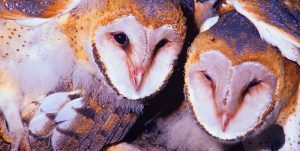 This unique national landmark is the result of volcanoes and shifts within the Earth’s crust, creating volcanic fields.  These peaks provide a challenge to hikers and climbers as well as homes for birds of prey.  Be warned!  If you decide to see the sights by climbing, do your homework.  The park is especially protective of its bird population, including raptors.  Curious about the California Condor?  Check out these “Condor Cams“. 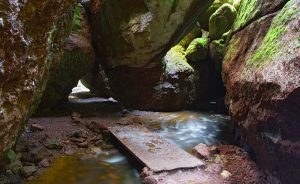 Pinnacles National Park has 15 different trails of varying intensities and lengths.  Many of the trails take visitors through caves, prairies and through the high country.  Each trail has something special about it.  For instance, if you travel toward Bear Gulch and enter the cave, watch where you step.  the Red Leg Frog uses the cave and basin within as a breeding ground.