Pastors reading this, you’re probably thinking ‘What could I possibly have in common with a military guy’. In our heads, pastors actually have quite a bit in common with them.

Six Things Soldiers and Pastors Have in Common That You Should Know:

1. They train really hard for the field but really can’t comprehend the depth of the mission until they get there.
2. They both enter a dangerous battlefield – just looks different.
3. They’re both extremely hard working and devoted to the mission.
4. They both go in strong and ready for action but often come out early, wounded.
5. The career path can be mentally debilitating.
6. They’re great at serving others and typically pretty bad at serving themselves.
As we coast into Memorial Day weekend with many making plans to go to the lake or enjoy the grand opening of the pool, today we will take a moment to remember and to honor one of the many that have lost their lives, making it safe for us to be able to execute our missions.
“MURPH” – a famous workout that thousands, perhaps even more than a million, will be doing Monday morning. Murph is a brutal workout to complete. Typically the fallen hero workouts are. As a way to remember and honor the pain that they endured in service for all of us. As churches will be closed on Monday, we “remembered” Thursday and Friday, but in a modified way. 😉 Here’s a few shots of our Carmel Crew crushing it! 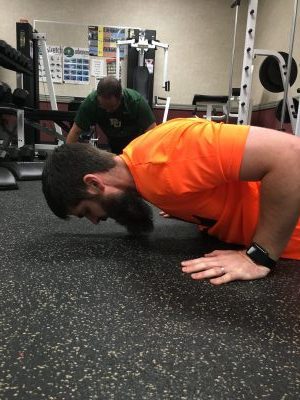 The true Murph Workout is:

The story behind “Murph”:

This workout itself was Michael’s favorite workout to do, which at the time referred to it as “Body Armor”, hence the 20 lb vest or body armor as part of the workout prescription.

So what made Lieutenant Murphy’s story so impactful? Here’s an excerpt about what went down in Afghanistan in June 2005:

On June 28, 2005, Lt. Murphy was the officer-in-charge of a four-man SEAL element in support of Operation Red Wing tasked with finding key anti-coalition militia commander near Asadabad, Afghanistan. Shortly after inserting into the objective area, the SEALs were spotted by three goat herders who were initially detained and then released. It is believed the goat herders immediately reported the SEALs’ presence to Taliban fighters.

A fierce gun battle ensued on the steep face of the mountain between the SEALs and a much larger enemy force. Despite the intensity of the firefight and suffering grave gunshot wounds himself, Murphy is credited with risking his own life to save the lives of his teammates. Murphy, intent on making contact with headquarters, but realizing this would be impossible in the extreme terrain where they were fighting, unhesitatingly and with complete disregard for his own life moved into the open, where he could gain a better position to transmit a call to get help for his men.

Moving away from the protective mountain rocks, he knowingly exposed himself to increased enemy gunfire.  This deliberate and heroic act deprived him of cover and made him a target for the enemy. While continuing to be fired upon, Murphy made contact with the SOF Quick Reaction Force at Bagram Air Base and requested assistance. He calmly provided his unit’s location and the size of the enemy force while requesting immediate support for his team. At one point, he was shot in the back causing him to drop the transmitter. Murphy picked it back up, completed the call and continued firing at the enemy who was closing in.  Severely wounded, Lt. Murphy returned to his cover position with his men and continued the battle.

As a result of Murphy’s call, an MH-47 Chinook helicopter, with eight additional SEALs and eight Army Night Stalkers aboard, was sent in as part of the QRF to extract the four embattled SEALs. As the Chinook drew nearer to the fight, a rocket-propelled grenade hit the helicopter, causing it to crash and killing all 16 men aboard.

On the ground and nearly out of ammunition, the four SEALs, continued to fight.  By the end of a two-hour gunfight that careened through the hills and over cliffs, Murphy, Gunner’s Mate 2nd Class (SEAL) Danny Dietz and Sonar Technician 2nd Class (SEAL) Matthew Axelson had fallen. An estimated 35 Taliban were also dead.  The fourth SEAL, Hospital Corpsman 2nd Class (SEAL) Marcus Luttrell, was blasted over a ridge by a rocket-propelled grenade and knocked unconscious. Though severely wounded, the fourth SEAL and sole survivor, Luttrell, was able to evade the enemy for nearly a day; after which local nationals came to his aide, carrying him to a nearby village where they kept him for three more days. Luttrell was rescued by U.S. Forces on July 2, 2005.

By his undaunted courage, intrepid fighting spirit and inspirational devotion to his men in the face of certain death, Lt. Murphy was able to relay the position of his unit, an act that ultimately led to the rescue of Luttrell and the recovery of the remains of the three who were killed in the battle.