From coast to coast, in Alaska and Hawaii, and in US Territories, the United States is filled with breath-taking and unusual sites.  Get out and explore this country’s great landscapes, national monuments and historic parks — virtually!  Join MissionFiT’s 2nd Annual Summer Journey Challenge: National Parks Expedition Edition.

MissionFiT athlete plus their immediate family. Minimum 2 people per family.

To participate in MissionFit’s Summer Journey: National Parks Expedition Challenge, virtually visit and hike all 62 National Parks.  Accumulate mileage with your family (ages 4 and up) for each National Park hike challenge…wherever you go on vacation this summer, from the comfort of a local Greenway, your neighborhood or even on a trip to get groceries. 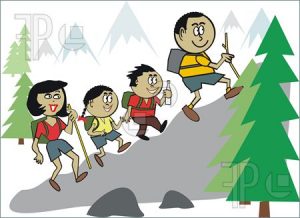 Compete with other teams, leaders and churches around the city from your own church/home. The first team to complete the challenge wins a prize!

Editor’s Note:  The following information was taken from Wikipedia.  Click on the links to learn more about our countries history and a few of its National Parks!

The United States has 62 protected areas known as national parks that are operated by the National Park Service, an agency of the Department of the Interior.

The Creation of National Parks

National parks must be established by an act of the United States Congress. The first national park, Yellowstone (WY), was created by bill and signed into law by President Ulysses S. Grant in 1872.  Then followed Mackinac National Park (MI) in 1875.  The US Army decommissioned Fort Mackinac in the 1890’s.  Today, the park is known as Mackinac Island State Park.  Then in 1890, Rock Creek Park (Washington, DC), Sequoia (CA) and Yosemite (CA) were created. Rock Creek Park was later merged into National Capital Parks to include: The National Mall & Memorial Parks, The White House and the Chesapeake & Ohio Canal National Historical Park among other sites in the DC area.

It Takes an Act of Congress

The Organic Act of 1916 created the National Park Service “to conserve the scenery and the natural and historic objects and wildlife therein, and to provide for the enjoyment of the same in such manner and by such means as will leave them unimpaired for the enjoyment of future generations.” The Antiquities Act protected many of the nation’s parks before it was upgraded by Congress.

Seven national parks (including six in Alaska) are paired with a national preserve.  A combination of  natural beauty, unique geological features, unusual ecosystems, and recreational opportunities help designate an area as a national park.

“O, Give Me Land, Lotsa Land Under Starry Skies Above…”

Twenty-nine states have national parks, as do the territories of American Samoa and the U.S. Virgin Islands. California has the most with nine, followed by Alaska with eight, Utah with five, and Colorado with four. The largest national park is Wrangell–St. Elias in Alaska, over 8 million acres (32,375 km2).  The smallest park is Gateway Arch National Park, Missouri, at approximately 192.83 acres (0.7804 km2). The total area protected by national parks is approximately 52.2 million acres (211,000 km2).  That’s an average of 870 thousand acres (3,500 km2).

“If You Build It, They Will Come…”

Only 1 person from the team needs to register the team.