As a Christian Fitness Ministry we like to honor and highlight Christians that are stewarding their temple exceptionally well; people that are wonderful examples for the community. This Testimony Tuesday, meet Pastor Clint Pressley, Senior Pastor of Hickory Grove Baptist. He’s a highly admirable leader in our city of Charlotte, a stellar athlete, and quite the community builder. 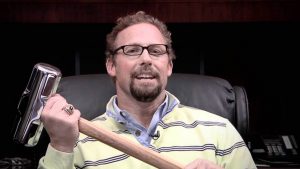 “There’s more than a connection between faith and health – it’s one in the same – you can’t have one without the other, at least not to the fullest degree. We have a large church with 21 pastors. My faith is not at its fullest unless I’m stewarding my health, I’m staying balanced, and feeling like I’m not going to crumble.”

Pastor Clint’s fitness background consists of football through high-school and college. He graduated enjoying lifting and periodically running marathons, which he claims “helped balance out his whole life”.

When he got out of seminary, he pastored a church deep in the country, 20 miles away from the city, in Mississippi. Taking on the typical weighty role as a lead pastor just did not have the time allowance for traveling 30+ minutes to a gym. But he still had a passion for fitness, knew and believed the benefits of keeping his body in shape as well as understood the calling we have to steward our temples. So….he got a few weights for the house and “never went back” to the traditional gym style.

Years later, he landed in Charlotte in a Pastoral role and just continued his theme of the home gym. And as a way to be even more intentional with his time, he began inviting his co-workers to come workout with him. The home gym grew and grew with now roughly 25 people regularly coming through and about 4-5 really consistent guys at 5am.

Being even more purposeful, that time now includes a bible study in the morning. Guys are memorizing and reciting full chapters of the Bible, even reciting the entire book of Ephesians to one another while lifting.

Eventually, this home gym became known as- “The Iron Shed”. 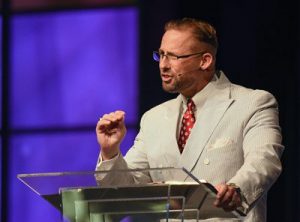 MissionFiT: The Iron Shed, how’d that name come to be?

“Oh, I don’t know if it’s special. Just rigorous exercise, strong fellowship, and scripture memory. I didn’t do it to be a ministry at first, it just grew into that.”

Another beautiful part of this fellowship is who is in the room. It’s not just upper leadership. It’s not just elders. It’s not just the fittest of the fit. It’s open to everyone. In fact, it’s the maintenance guys that set their bi-monthly competitions. YES, I said competitions! The Iron Shed even has a competitive aspect to it. Every 6-8 weeks, the maintenance team gets together and comes up with the next competition of events. Then, the athletes train hard preparing for what’s to come. Three days a week they typically lift and do some running. More compound type movements – no body building.

“Our next event is the Good Friday Beatdown. We’ll meet at church and I believe the competition is:
run 1 mile
20 chin-ups
1 mile
20 bodyweight bench press
40 bodyweight deadlifts
And a 200# iron suitcases carry to see who can carry it the farthest” 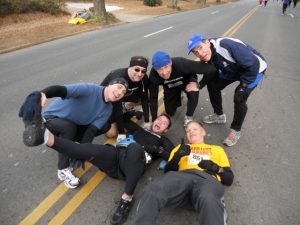 MissionFiT: Do you feel a connection between faith and health?

“Yes, not just a connection – it’s one in the same – you can’t have one without the other, at least not to the fullest degree. We have a large church with 21 pastors. My faith is not at its fullest unless I’m stewarding my health, I’m staying balanced, and feeling like I’m not going to crumble.”

MissionFiT: How has fitness and wellness impacted your life and your ministry?

“Since I was a kid, it’s been my lifestyle. Now as a Pastor it’s made me more effective. For 5 years I did 5 sermons every Sunday. You gotta’ be in shape to do it with excellence for the people you’re called to serve. Nobody wants to follow a slob.”

MissionFiT: How do you influence your staff to pursue stewarding their temples?

“We try not to run with a standing hierarchy, so our guys are brothers in the Lord. But culture is permeated. Several will work out at The Iron Shed. One of our worship leaders has now built The Iron Shed 2.0, which has a more CrossFit style to it. ..but (chuckle) we tell people that come they can’t do kickbacks or wear under armour.”

MissionFiT: How do you influence your congregation to pursue stewarding their temples?

“I don’t talk much about it because it ends up being about myself, so I stick to expositional preaching, going through the Book of Acts, preach whatever’s next. But we do share with our congregation if we have a ½ marathon race or something that we’re putting a Hickory Grove team together.”

MissionFiT: How would you suggest other pastors go about creating a culture of “well-th” within their congregation?

“Number one is get really good at doing that yourself. Pursue intense training, not just walking, something that takes you to the point of throwing up,
Two is, take somebody with you. Take the model of discipleship and apply it here with exercise. Rarely do anything alone. It’s time well spent, they go together well.” 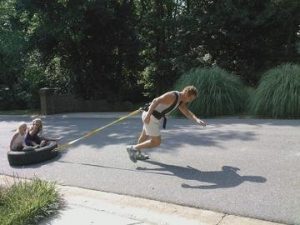