Boy!  Has this been a weird two months or what!?  June brought the promise of more open doors (for businesses, that is), July brought HOT!  WET HOT!  And MissionFiT’s Challenge The National Parks! Week 8 hikers are cooling off in the mountains of Washington state and Alaska.   Hey, bring back some sno-cones, will ya?

Team Standings for Week 8 of Challenge The National Parks:

Where Do The Tracks Lead?

This week, our hikers visit North Cascades and Olympic National Parks, both in Washington state.  Then, a cut through Canada and into Alaska to visit Denali, The Gates of the Arctic , Glacier Bay.and Katmai. Click on a park name to take a virtual tour of the park or skip to the Cliff Notes, just below. 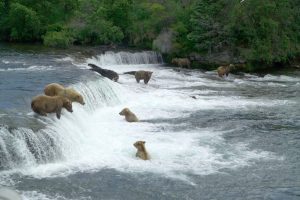 Yes.  Bear School.  Katmai National Park, located in King Salmon, Alaska, is serious about safety.  Because brown bears can be serious threats.  All NPS employees, volunteers, visitors, campers, and anyone else, is required to view a safety video when they go to Brooks Camp.

In addition to bear watching, visitors can hike, backpack, camp, hunt, fish and trap while in Katmai National Park.  This is the place to be if you love the outdoors and enjoy the wild! 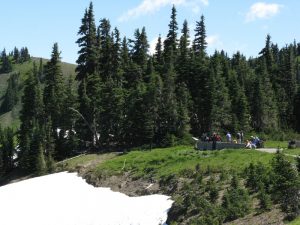 At 922,700 acres, Olympic is one of the larger national parks in the lower 48 states.  By car, you would drive at least 3 days, touring the sights of the park.  And the diversity of eco-systems within its boundaries would not disappoint!  Olympic has beaches, rain forests, hiking trails, mountains and valleys, and is a winter wonderland in the high country.

In the early 1900’s, the Elwah and Glines Canyon Dams were built in response to the ever-expanding logging industry. Although the dams helped moved the logs along, the local fish & tribal home sites suffered.  Salmon weren’t able to reach spawning areas and the installation of the dams forced flooding into historic and cultural sites along the Elwah River.  It only took man about 100 years and a few adjustments along the way to begin revitalizing the river through restoration projects.  The largest projects included removal of both dams, started and completed in the fall of 2011.  River restoration continues to this day, including re-vegetation efforts, research of the river’s ecology and restoration of various species of fish and wildlife all along the river.

Gates Of The Arctic 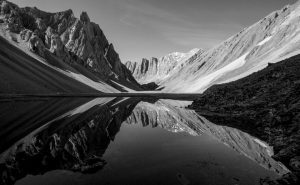 From birding to backpacking, there are many things visitors can do throughout the park.  Six rivers allow for great fishing and boating opportunities.  But you will need to make travel arrangements in order to get there.  Situated north of Fairbanks, Gates of the Arctic is accessible by air or by car.  However, once you get near the park, lace up your hikers ’cause you’ll have to walk in from the road. 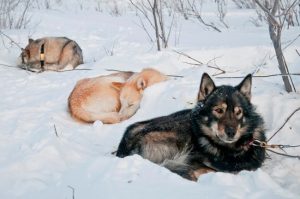 Many people think of the annul Iditerod Sled Dog Race, winding from Anchorage to Nome, Alaska.  A lot of preparation for animals and sledders is necessary before one treks through the Alaskan wilderness.  Read more about this preparation and a trip NPS Ranger Laurie made with sled teams and sno-mobiles.